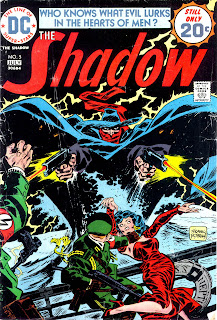 Many times here on the Diversions blog, Ol' Groove has waxed eloquent (yeah, that's what I'm callin' it!) on Denny O'Neil and Mike Kaluta's work on DC's version of the Shadow. Of course, there were times when perfectionist Kaluta couldn't make his deadlines, and on those occasions, DC dared to hand the artistic reins over to the incomparable Frank Robbins. Robbins' style was so different from Kaluta's that many fans didn't know what to make of it. I know Frank's stylings threw Young Groove for a loop! As I got older, though, I came to realize the genius behind Robbins' cartooning. His ability to evoke mood and emotion more than makes up for what he lacks in his posing and storytelling abilities. Now, with his Milton Caniff-school style, he looks like a breath of fresh air, but then? Well, even DC wasn't sure. Dig what they ran at the top the letters page of Robbins' Shadow debut issue:

"I think he's done a fine--and very interesting--job. Agree? Or disagree? Let us have your opinion."

"And we really are interested in your opinion of the Frank Robbins Shadow."

Dollars to doughnut holes that Robbins' Shadow artistry still mystifies and divides fandom! Decide for yourself, Groove-ophiles! Here from The Shadow #5 (March/April 1974) is "Night of Neptune's Death!" by Denny O'Neil and Frank Robbins. 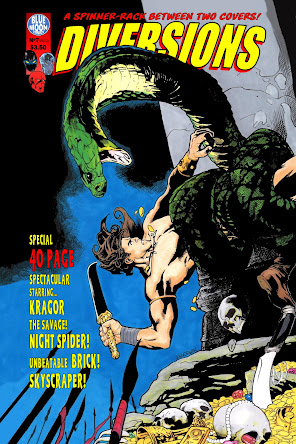