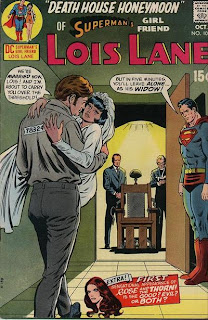 What? You didn't know Superman is Lois Lane's second husband? I ain't jivin'! Y'see, way back in Lois Lane #105 (cover dated October, 1970), there was this mysterious group of criminals called The 100 that spent their time causing all kinds of trouble for Metropolis in general and Superman in particular. The 100 had made an enemy of not only Superman, but a brand new super-heroine, the Thorn (no relation--besides writer/creator Robert Kanigher--to the Golden Age villainess of the same name), who was making her vendetta against The 100 known by dropping leaflets all over Metropolis. Clark (Superman) Kent and Lois get their hands on one of those fateful fliers, which gives Lois the bright idea of doing a story on the Thorn. Daily Planet editor Perry White, thinking the assignment too dangerous, gives the Thorn story to Clark, assigning Lois to the much safer job of covering the execution of convicted killer, Johnny Adonis. Y'know, 'cause covering a man being dying in an electric chair is more ladylike than trying to get the lowdown on a new super-heroine.

Like any good employee, Lois heads for the state pen, planning to interview Adonis before his execution. During the interview, Adonis pleads innocence (naturally!) and asks Lois to marry him as repayment for a debt she owes him. Seems Lois was drowning in an icy pond and Adonis beat Superman to the rescue. Sure enough, after the rescue Lois did promise, "I'll do anything to repay you!" Being a lady of her word, despite the warden and Superman's protests, Lois goes through with the marriage and is carried across the threshold--into the execution room, giving her a wonderful view of the electric chair. How romantic! 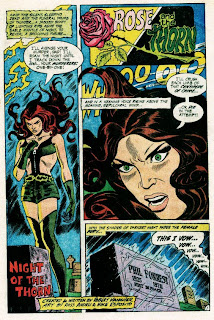 Angry and frustrated, Superman stomps off, and as soon as he leaves, wouldn't ya know it, the prisoners riot and break out, using Lois as their hostage. When the escapees (including Lois' new hubby, Johnny Adonis) arrive at their rendezvous with their outside help, they leave Lois tied up in the escape vehicle--and shove it into the river! Once more, Superman is nowhere to be seen while Lois heads to a watery grave, but the mysterious Thorn is! When Lois and the Thorn surface, the escaped cons open fire. Suddenly, Adonis develops a conscience and starts shooting at his fellow cons, vowing, "I'm not gonna let you blast my wife like she was a fish in a barrel!" As usual, a comicbook crook with a newly minted conscience doesn't last long, and Adonis' buddies plug him. THEN Superman shows up (and people call him a Boyscout?). Superman rounds up the crooks, Adonis dies in Lois' arms, Thorn disappears, and all Lois can say? "And I'm left with a sensational scoop of marriage and murder!" She must've thought someone besides Superman might be listening (and judging her!), so she added, "My fingers will type the story...but every key will tear into my heart...like a dagger!" Yeah, Superman and Lois, our heroes. For this story, they have all the sentiment of the Seinfeld cast!

All in all, it's a fun comic, though, brought from mediocre and maudlin to pretty cool thanks to the back-up origin of Thorn and the terrific art by Ross Andru and Mike Esposito. Thorn, along with her alter-ego Rose Forrest, became the regular back-up feature, "Rose and the Thorn", for the next two-dozen issues, forcing li'l Groove to buy Lois Lane comics on a regular basis. Eeeww, gross-out!
Posted by The Groovy Agent at 2:58 PM