Third Anniversary! Black and White Wednesday: "Terror on the Planet of the Apes Part 1" by Conway, Moench, and Ploog 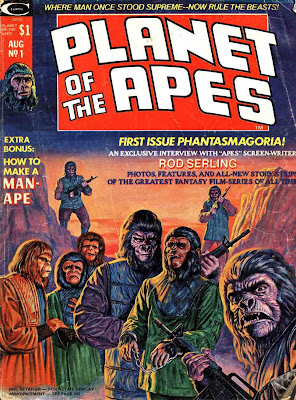 What it is, Groove-ophiles! I'll tell ya what it is--it's DotGK's THIRD ANNIVERSARY! Man, does time ever fly when you're having fun! And let Ol' Groove tell ya, fun is what it's been! It all started with a kooky title and a whim, and now we're well past 1,000 (nearly) daily posts, sitting on the back side of 1.7 million (!) hits, and starting the day for over 1,700 subscribers/followers! Sounds like bragging, I know, but really, Ol' Groove is nothing but humbled by the thought of all'a you Groove-ophiles who read and respond to what we do here in Groove City! Thanks everyone! Ol' Groove loves ya, baby!

To celebrate this momentous occasion (well, it's momentous to somebody!), Ol' Groove thought he'd share a post about one of the most requested topics in our three year history--Planet of the Apes!

Anyone who has cable or satellite knows that the 1968 Michael Wilson/Rod Serling film adaptation of Pierre Boulle's 1963 novel is one of the all-time sci-fi classics. It led to a series of flicks that became extremely popular once they began running on CBS-TV circa 1973. By 1974, monkey-mania was hitting hard, with tons of PotA merchandise hitting the stores, a live-action TV series (on CBS, natch) and cartoon (in 1975 on NBC), and of course mighty Marvel's magnificent b&w mag, and that's what we're gonna focus on right now! 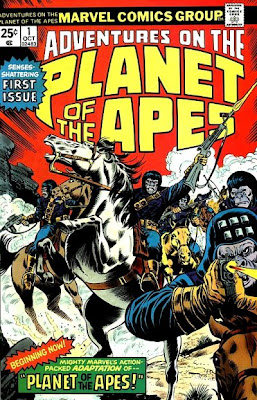 Like many of the highlights of the Groovy Age, PotA came to Marvel through the efforts of visionary editor Roy Thomas. Before PotA-mania hit, Roy had a discussion with his pal (and comicbook creator, and Wally Wood disciple, and TOPPS trading cards genius, and namesake of T.H.U.N.D.E.R. Agents' Dynamo) Len Brown about how Marvel should get the rights to do APES comics. Roy thought it was a great idea and took it to publish Stan Lee (who?). Stan dug the idea, but wasn't sure it would really be a hit, but told Roy to pursue the idea if he liked. Roy actually put it on the backburner, but got the ball rolling so the mag would be out before the TV show hit the airwaves. Being too busy to write it himself, Roy enlisted his pal (comicbook and sci-fi writer at the time, now TV writer) Gerry Conway to develop a brand new APES series that would serve as a sequel to the movies to lead off the mag. For the rest of the mag, they'd fill it with tons of photo-articles (by guys like Tony Isabella and Chris Claremont) and back it all up with adaptations of all the APES movies, beginning with PLANET. Cool idea, huh?

As it worked out, Conway didn't have time to write TERROR ON THE PLANET OF THE APES, so those chores fell to Doug Moench, freshly arriving at Marvel after wowing us over in Warren's b&w mags. The art would be supplied by none other than Mike Ploog, ensuring that TERROR would be one of the best-written and best-drawn b&w strips since Thomas teamed with Barry (Windsor-) Smith on Savage Tales' Conan! Moench would also write the adaptations, with the art on PLANET coming from Marvel mainstays George Tuska and Mike Esposito.

The path to ape-magdom wasn't primrose. Marvel had to scrap it's first PotA #1 print-run because the folks at Fox felt George Tuska's depiction of Taylor was too close to looking like Charlton Heston (gotta keep the lawyers off yer back!), even though Tuska had purposefully tried to stay away from Heston's likeness. Tuska had to re-draw all of Taylor's figures, Fox's suits were satisfied, and the mag went to the printers one more time.

When PotA #1 hit the magazine racks in June 1974, it was a sensation, of course! It looked great and it certainly gave us our money's worth at 84 pages for a buck. Now, Ol' Groove doesn't wanna fire all his guns at once, so I ain't gonna run the entire mag here today, but I do wanna give you a glimpse of the sheer, flat-out awesomeness of Moench and Ploog's TERROR. (Don't shed a tear! I'll get to the PLANET adaptation eventually, honest!) 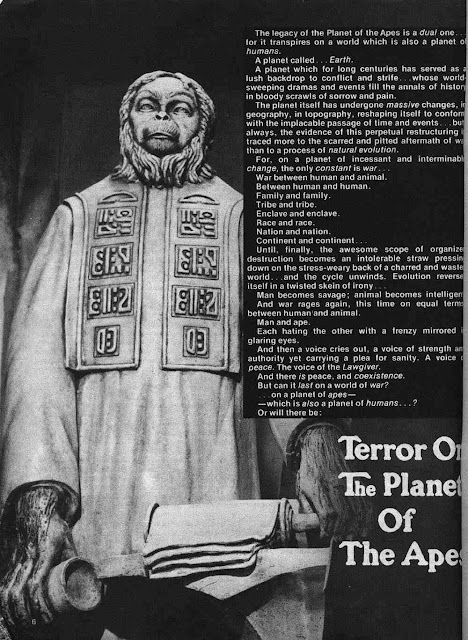 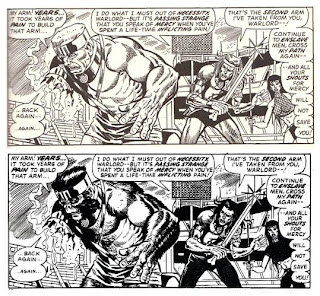 Marvel's PotA mag outlasted ape-mania, both the TV shows, and most of the merchandising, running a whopping twenty-nine issues (in a time when most mags never made it to ten!) ending in December 1976--just a few months shy of the next big sci-fi event--the biggest of all--Star Wars, which Roy, again, nabbed the rights to for Marvel (but more on that another day). Moench stayed on for the entire series, Ploog eventually left comics and was replaced with Tom Sutton, while the adaptations/back-ups enjoyed a merry-go-round of artists.

Marvel also published a color comic, Adventures on the Planet of the Apes, reprinting and coloring their adaptations of PLANET and BENEATH THE PLANET OF THE APES, that ran for 14 issues. And somehow, they managed a staggering 123 weekly issues of PotA in the UK. I suppose that they chopped the strips up into shorter chapters--and I read they actually transformed their Killraven/War of the Worlds strips into an APES series called Apeslayer. (Thanks for that info, Pete Doree--and come back to bloggin' buddy--we miss ya!)

Whew! Ol' Groove's getting long-winded again, ain't he? I'm gonna go now, but come back tomorrow as we say hello to YEAR FOUR! Pax!
Posted by The Groovy Agent at 12:02 AM