If You Blinked You Missed: Beware! The Claws of the Cat 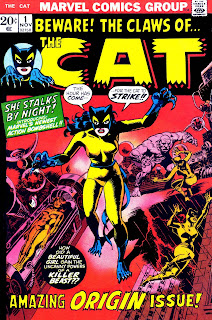 In 1972 Marvel Comics publisher Stan Lee decided that the time was right to initiate a line of comicbooks featuring female leads. Women's Lib was huge, especially in the hearts and minds of the collegiate readers so near and dear to Stan's heart. He didn't wasn't happy with the straight romance comics Marvel was producing because, let's face it, Stan's thing was superheroes, action, and adventure. He dug it, and he knew his fans dug it. So newly-crowned editor-in-chief Roy Thomas was given the task to take the concepts Stan had dreamed up, The Cat, Shanna the She-Devil, and Night Nurse and make 'em into comicbook reality. Stan had especially high hopes for the lone straight-out superheroine in the bunch, Greer Nelson, aka the Cat.

Written by the soon-to-be-Mrs. Herb (Incredible Hulk) Trimpe, Linda Fite with art by the incomparable team of penciler Marie Severin and inker Wally Wood, The Claws of the Cat #1 (August 1972) had all the earmarks of another hit for Marvel. A likable, realistic, tragic lead character thrust into the role of a superhero. Story wise and art wise, The Cat #1 was a wonderfully crafted tale that could have come straight from Marvel's Silver Age heyday, but given a "modern" 1970s sensibility. Fite's plot was heart-wrenching and moody; her dialogue straight from the Roy Thomas/Gerry Conway/Denny O'Neil school of "relevance". The art by Severin and Wood was lush and as moody as Fite's story. It should have been a smash-hit. 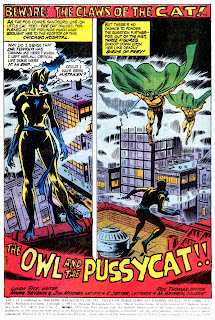 Unfortunately, the magic that made that first issue so special quickly began to unravel. When issue #2 (October 1972) hit the stands, Wally Wood was gone, with veteran Supergirl artist Jim Mooney replacing him on the inks. 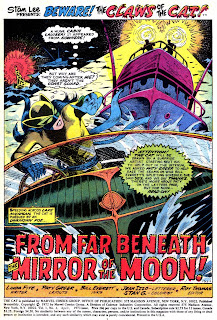 With issue #3 (January 1973), an entirely new art team, Paty Greer and Bill Everett was on board. Issue #4's (March 1973) art was by the combined talents of Jim Starlin, Alan Weiss, and Frank McLaughlin. So, while the art on each issue was excellent, it was, mildly put, inconsistent. It's hard to build an audience when the character's look changes--sometimes drastically--from issue to issue. (That's not even taking into account the legendary unpublished Ramona Fradon story.)

The other problem was that, while Fite's writing chops were pretty sharp, her choices of villains left much to be desired. Two "B"-list Daredevil villains (The Owl in #2 and Man-Bull in #4) and a "C"-list Sub-Mariner villain (Commander Kraken) didn't do a thing to help The Cat establish any type of identity. 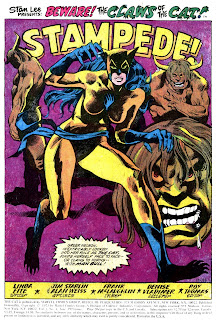 Lack of a good supporting cast also kept the book from living up to its potential.

Though The Claws of the Cat faded into comicbook oblivion, Greer Nelson wasn't forgotten. Months later she'd be mutated and elevated to the role of Tigra, the Were-Woman and become a mainstay in the Marvel Universe, appearing in everything from the Fantastic Four to Spider-Woman to the Avengers.
Posted by The Groovy Agent at 12:02 AM