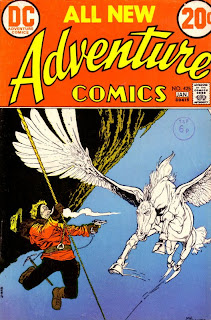 What's happening, Groove-ophiles? Or you might be asking that very question, yourself. Where's today's "Black and White Wednesday"? Well, it's being pre-empted today in order to bring you the debut post of another of Ol' Groove's "sorta series'", "Groove's Faves!" Why start "Groove's Faves" today instead of tomorrow? 'Cause today's my birthday (nanananana)! Gonna have a good time (nananana)! Not only that, but today's post is post #400. Wotta wunnerful coinkeedeenk!

Ahem. I've mentioned my great love of comics like Thrilling Mystery Stories #'s 1-2, Chamber of Chills #2, and a few others. Well, Adventure Comics #425 (September 1972) is another example of comicbook nirvana that belongs in that illustrious group of pulp-n-ink masterpieces. Why? I thought you'd never ask...

First up, Adventure #425 is the first issue of editor Joe Orlando's post-Supergirl experimental phase. That in itself makes it kinda special. Next, the ish features interior art by a trio of absolute masters of comicbook art, Alex Toth, Gil Kane, and Alex Nino topped with a cover by the incomparable Michael Kaluta (who's birthday was yesterday, by the by). Plus, this issue features the debut story of one of Ol' Grooves favorite "forgotten heroes", Captain Fear (created by Robert Kanigher and featuring pirates, baby!). Dunno who did the "Prior Warning" short, but it's still pretty cool despite the stale Hitler appearance. Still having doubts? Okay, but when you finish reading the pages to follow, I get to say, "I told ya so!"