Random Reads: "Don't Call Me Superboy!" by Bates and Swanderson 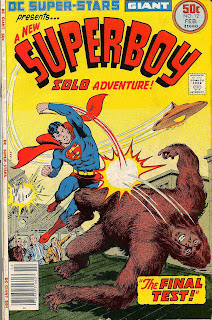 After a few years of Superboy sharing his mag with the Legion of Super-Heroes, the powers-that-were at DC decided it was about time The Boy of Steel got some solo-page time. Paul Levitz, editor of DC Super Stars, called on the Superman dream team supreme of Cary Bates, Curt Swan, and Murphy Anderson to put together this special one-shot story. The irony is that Bates concocted a story called "Don't Call Me Superboy!" which was about the "in-between" years of Clark Kent's life. The years in which he felt too old to be called Superboy, but was too young for anyone to think of calling him Superman (guess he'd never heard of Peter Parker's alter-ego...).

As an added bonus, Bates' story tied into the then-current Bigfoot craze. A cool and smart move since ol' Sasquatch was all over the tabloids and TV at the time, including being featured in a legendary TV crossover between the Six Million Dollar Man and the Bionic Woman. Far-out, huh? Okay, are ya ready to delve deeply into the pages of DC Super Stars #12 (November 1976)? Then let's go!