Howdy, Pardners! Another Friday, another trip down memory lane. This time, we're digging Ol' Groove's second favorite DC cowboy (after J0nah Hex, who is gonna show up soon, never you fear!), Bat Lash! Though the ad over there is quite misleading (it actually looks more like an ad for Hex--who wouldn't even be created for another year or three), it does kinda set the tone for the genesis of our genteel gunslinger, since I would almost bet the ad was created before the comic was! Why do I say that? Read on... 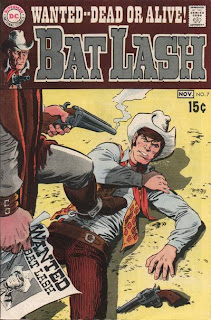 In the dawning days of the Groovy Age, western comics just weren't hip, man. John Wayne was and others were still making some good cowboy flicks, and the "Spaghetti Western" a la Clint Eastwood's Man With No Name was considered incredibly cool; westerns still held ground on the old boob-tube, too--so why couldn't the western make a comeback in the four color mags? It was time for a new breed of comicbook western hero, and a posse of DC elite including, but not limited to, Carmine Infantino, Sheldon Mayer, Joe Orlando, Sergio Aragones, Nick Cardy, and Denny O'Neil set out to create the next big western comicbook hero. Mixing the traditional with the "Spaghetti Western" style with a heaping helping of James Garner's Maverick character (who was still doing quite well in reruns), they created Bartholomew Alouysius Lash. Here's a snippet of Aragones' version of Bat Lash's beginnings (from Comic Book Artist #1):

They called me and said 'Sergio, we need a western, we need a cowboy, called Bat Lash. Think about it'. So I did, I thought the character. The way I work, things pop in my head pretty fast, so as I was sitting with them in the restaurant, I was describing how the character was. So Bat Lash was born right there, in the restaurant...one of the things they wanted, they wanted to be 'different' a different western, but they didn't know how, so I came up with a guy that had good taste for food, and music, and loved flowers and nature. And was a crack shot. But he was no clown. The idea when I wrote it was that he was man with a sense of humor, but he was not a clown. He would do things that will (make) other people become the butt of humor, but not him. The humor should be the result of (Bat Lash's') action.

So the behind-the-scenes stuff is a bit confusing--the details of the creation of comics-by-committee usually are--what else is new? It's the end result that matters, and Ol' Groove's gotta give the boys the old thumbs up. From Showcase #76 (May, 1968), here's "Bat Lash!" 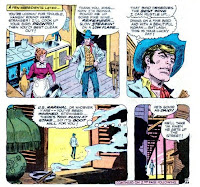 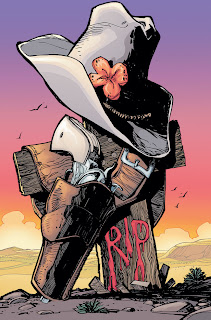 Aragones definitely delivered on the regular Bat Lash comic (which made its debut in July, 1968), ably assisted by Denny O'Neil's dialogue and the magnificent art of Nick Cardy. The strip was fun, exciting, charming, and definitely stood out on the crowded spinner racks. Fandom took Bat Lash to its heart, making it "buzz worthy" before such a term even existed. It even won the Alley Award (comics' version of the Oscars) for best western comic in both 1968 and 1969. However, the general public either didn't get it or didn't care, because Bat Lash only lasted 7 issues in his own title, ending with the July, 1969, issue . Like all good heroes, though, the legend lived on. DC reprinted some of the Bat Lash strips in the back of All-Star Western in the 70s, produced new Bat Lash strips as back-ups in Jonah Hex in the 80s, made him part of 1998's Guns of the Dragon mini-series, gave him a few guest appearances in the latest incarnation of Hex's mag, and a mini-series of his own last year. Heck, somebody in Hollywood even remembers Ol' Bat and put him in an episode of Justice League Unlimited back in 2005!

I don't know about you, but Ol' Groove can't wait until this coming July when DC finally collects all of Bat Lash's appearances into a Showcase Presents tpb. Now, DC, get yer act in gear and get the mini-series team of Aragones, Peter Brandvold, and John Severin back together for a full-fledged series!