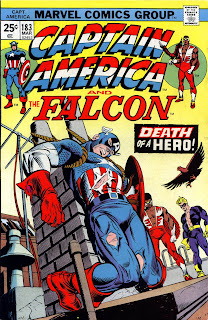 Greetings, Groove-ophiles! Y'know, Ol' Groove's read a lot of comics and a lot of comics reviews, and one thing that honks me off is when a reviewer talks about how sophisticated and deep today's comics are--by comparing them to the "frivolous, childish, cookie-cutter" comics of the 1970s. Man, that burns me up and bums me out. So, I thought I'd combat those misguided ideas in my own non-conscientiously objectionable way by posting proof positive that 1970s comics could be deep...downright heavy, even.

Take Captain America and the Falcon #183 (December 1974) by Steve Englehart and Frank Robbins, f'rinstance. Steve Rogers, after learning the President of the U.S. of A. was behind the biggest anti-American conspiracy in history (this was writer Steve Englehart's way of voicing his opinion on the whole Watergate scandal that was rocking the real world at the time), gave up the mantle of Captain America and became Nomad, the Man Without a Country. Yep, Cap was so disillusioned by what the Marvel Universe's Prez had done that he gave up on the very country he'd been born and bred to defend, and becoming Nomad was his response to that sickening situation. Other folks, however knew that we needed a Captain America, and tried to take his place. One of those folks was a young dude by the name of Roscoe. Problem was, about the time Roscoe took over for Cap, the Red Skull decided to bop back into town. After capturing Roscoe and then learning that he wasn't the real Cap, the Skull went nutso and murdered him, then beat the Falcon to a pulp for good measure. That's when Steve Rogers learned that you can't run from destiny...and that his destiny was to be--well, just read on, baby... 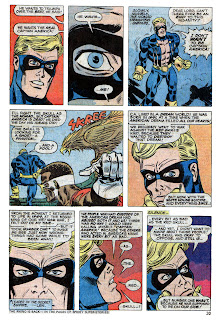 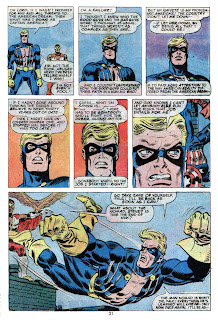 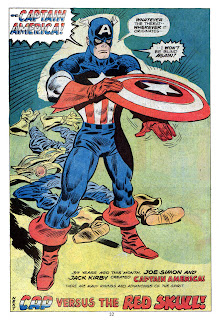