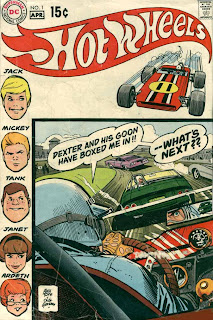 Have I ever mentioned the fact that Li'l Groove was almost as big a fan of Mattel's Hot Wheels as he was of cartoons and comicbooks? Well, it's true. I had tons of the tracks, the cars, iron-on decals for my windbreaker (which I proudly wore to my very first day of school), you name it, I had it. Imagine my glee when all three of those worlds met through the truly titanic talents of Alex Toth! In 1969, Toth designed the cast for the Hot Wheels cartoon show; a show which made its debut on ABC-TV in September, 1969. In December of that same year, DC produced the comicbook version of the show--and was wise enough to hire Toth to draw all but the final issue (but hey, they got Neal Adams to do that one, so who could complain?). The show ran for two seasons; the plug being pulled, not because of poor ratings, but due to pressure from parents' groups and the FCC claiming the show was nothing more than an extended commercial. Boy, the times they have changed, huh? The comic only ran six issues (January 1970-October 1970), but man, were they six gorgeous issues. Aside from the mastery of Toth's penciling, there was the rare treat of seeing Toth inked by Dick Giordano on a few of 'em. Giordano's slick inks looked really great over Toth to Li'l Groove's eyes--they look good to Ol' Groove's bifocalled eyes to this day! So, dig the crazy intro to the cartoon show, then groove to the debut issue (written by Joe Gill, no slacker in the writing department!). Start your engines!!