If You Blinked You Missed: The Return of the New Gods 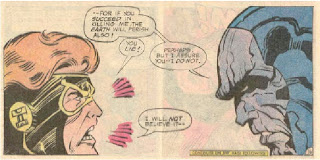 Most all of fandom knows all about Jack Kirby's New Gods and its greatest character, Darkseid. In fact, Ol' Groove has posted on that wondrous series here. But how many remember the comic that filled the New Gods void between 1972 and 1982, The Return of the New Gods? RotNG first appeared in DC's 1st Issue Special #13 (January 1976), plotted and edited by Gerry Conway, scripted by Denny O'Neil, and illustrated by Mike Vosburg. They managed to give off a pretty good Kirby vibe despite the annoyingly more superheroic threads they gave Orion (did they really need to put that big "o" on his chest?), but the mag seemed to sink, unnoticed. Was DC's heart really in returning the New Gods to us? 'Tis a good question, especially when you consider this was the final issue of 1st IS.
Darkseid and a few other New Gods characters took up residence, for a time, in (of all places) Secret Society of Super-Villains (issues 2-5, April-October 1976), so somebody up there still liked 'em.

Then, in April, 1977, the New Gods actually did return, picking up the numbering from their Kirby days. The mag ran for 8 issues, numbers 12-19, ending exactly one year later, in April, 1978, with what would have been ish 20 being split into two chapters and running in the first two Dollar Comics issues of Adventure, #'s 459-460 (June-August 1978). DC called it The Return of the New Gods, but Ol' Groove calls it The Forgotten New Gods, 'cause when Kirby came back to DC in the early 80s to finish his Fourth World magnum opus, he totally ignored Conway and company's contributions. Hey, it was Kirby, it was his creations, so that's totally cool. Still... 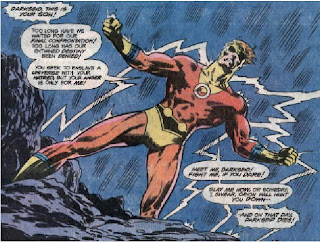 A lot of fans don't dig this version 'cause it's so different from what Kirby would have done. That's true, but Conway, who would write the entire Return series was not a bad sci-fi writer at all, and had proven himself as being not-too-shabby with mythological/fantasy when he wrote Thor for Marvel. Gerry wrote some fun, if not earth-shattering, stories on this series, and showed great respect for Kirby's koncepts. The art by Don Newton (usually inked by Dan Adkins) was outstanding. Again, very different from Kirby, much more naturalistic, but still, Newton could masterfully convey the nobility of the New Gods. And I really, really dug the female New God Conway and Newton introduced, the blue-skinned and deadly Jezebelle "of the fiery eyes". Ol' Groove likes to think that somewhere in the multiverse this less bombastic version of the New Gods still exists.


Dig the first Conway/Newton collaboration from The Return of the New Gods #12 and see what you think, Groove-ophiles! 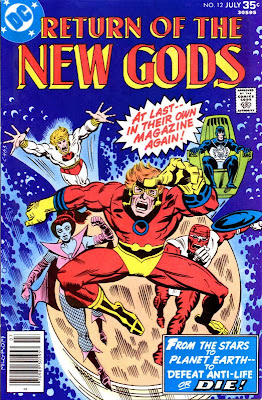 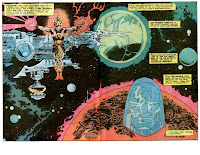