Groove's Faves: "The Grandee Caper!" by Delaney and Giordano 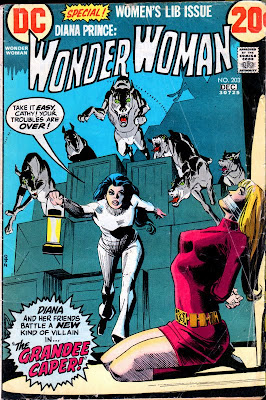 What it is, Groove-ophiles! Today we're gonna turn the Waybak Machine back to August, 1972, so we can check out sci-fi legend Samuel R. ("Chip") Delaney and Dick Giordano's paean to Women's Liberation (to say that WL was a huge topic back in '72 is like saying it's a little chilly at the North Pole). "The Grandee Caper!" (the title only appeared on the cover, by the way) was editor Denny O'Neil's swan song as editor of Wonder Woman (#203), and it was, as O'Neil calls it in the letter's page, "...a small but nonetheless polished milestone..." that "...gets Diana solidly into women's liberation." Ironically, after all the years of "Diana Prince as Emma Peel", somebody finally gets the "New Wonder Woman" right--and it turns out to be the final issue of that era. With ish #204, Robert Kanigher would re-take the reins of WW (he'd written tons of WW tales during the Golden and Silver Ages--again, to put it mildly) and take her back to "her roots"--which means tossing out everything she'd done and learned during the "Mrs. Peel" era. But more for on that you'll have'ta wait for our New Year's Eve 2010 party (Yeah, Ol' Groove can be sneaky!). Right now, dig on a fine story with suh-weet Dick Giordano art (is it just me, or does Diana look just like Elizabeth Montgomery in the last panel of page 21?). Enjoy! 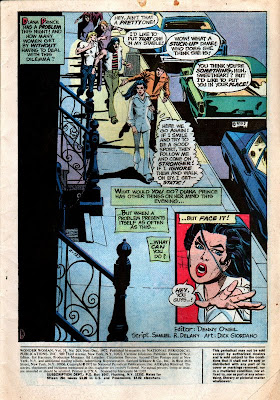