Black and White Wednesday: "The Winnah!" by Eisner w/Feiffer

Whaddya say we truck on back to the Golden Age via the Groovy Age today, Groove-ophiles? This one is a wonderful trip down Memory Lane for Ol' Groove. One of those cold, rainy days just before Christmas back in 1974. A little extra spending money made for a very interesting trip to book section of my beloved Mac's super-store. Yers trooley, mind you, was raised by parents who grew up in the 40s/50s and who had cut their teeth on comicbooks and radio shows. Hearing about the Golden Age of those two media was always a favorite pastime, and any time Young Groove got the chance to actually get his hands on any three-dimensional, real-life forms of those memories, said nostalgic stuff was seized upon with relish. So, on this day of days, I found the second volume of Pyramid's The Shadow reprint series (The Black Master--the first Shadow pb I ever saw--oh, those Jim Steranko covers!) and the sixth (again, the first I'd seen) ish of Warren's b&w Will Eisner's The Spirit reprint series. I don't remember much else about that day except a visit to my maternal grandparents and hearing Neil Sedaka's "Laughter In the Rain" on the car radio... 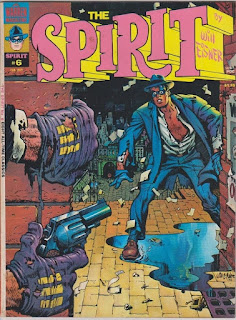 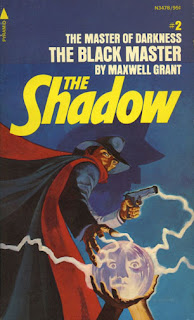 Being 11 years old, it took Young Groove a while to make it through that Shadow novel, but I devoured that issue of The Spirit right away. (The only Spirit story I'd ever read, up to that point, was the one reprinted in Jules Feiffer's Great Comic Book Heroes, but Ol' Groove doth digress...). That moody cover, perfectly setting up the first story in the ish ("Showdown" featuring a great battle-in-the-dark between The Spirit and his arch nemesis The Octopus) is still an all-time favorite cover (kudos to penciler Eisner and painter Ken Kelly). All the stories in that ish were cool: "The Wedding" and the "Job" being a romantic two-parter featuring supporting characters, "The Lamp", "Glob", "Wild Rice", "Taxes and the Spirit" (stories about a genii, a caveman, a kidnapped-rich-girl-turned moll--right in tune with the then ongoing Patty Hearst saga in the news, and tax collectors). You can see right there that this comic was very, very different than the usual reams of super-heroes and monsters. But my favorite story of the issue (and yes, it's still my fave) is "The Winnah!" by Will Eisner himself (aided and abetted by a young Jules Feiffer--hey, the guy who wrote the book that turned me on to The Spirit--whoa!). "The Winnah!" is the story of two brothers, boxers, the older one worshipped by the younger one, and neither of them very good at making life-choices. It was like watching a classic movie on paper--and the kicker? The Spirit isn't even in the story! He's only mentioned on the last page... 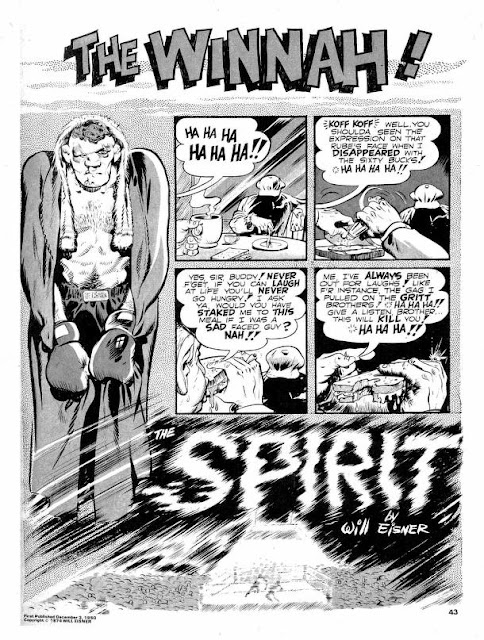 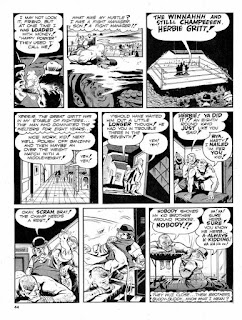 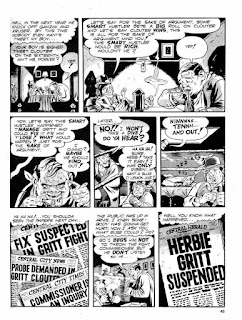 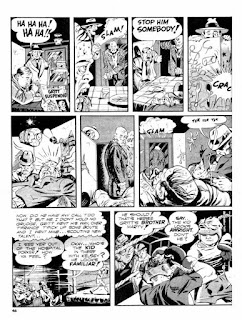 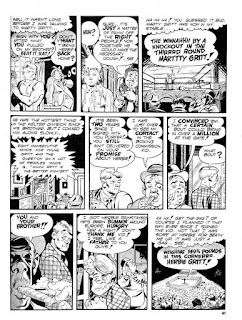 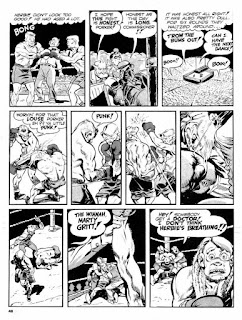 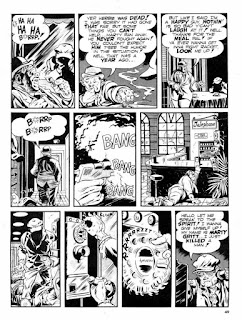 Man, does Ol' Groove ever LOVE The Spirit!
Posted by The Groovy Agent at 12:02 AM