Greetings, Groove-ophiles! Ol' Groove is having a birthday this coming Saturday, I've got a brand new grandchild (#4!) on the way, and school has started back. Instead of struggling to keep up or (heaven forbid) getting behind, Ol' Groove is going to try something I've been toying with for a long time: re-runs! Yep, there are a lot of old posts that I'm really proud of that don't seem to have gotten the attention I'd have liked, so I'm going to run them this week. Next week, Ol' Groove'll be back with new posts, but 'til then, enjoy and comment on these Favorite Posts! 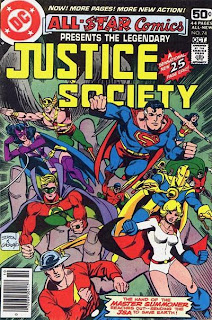 Super-teams have been popular ever since the Justice Society got together to swap stories back in the Golden Age. Super-teams catapulted superheroes back into prominence during the Silver Age when DC put together the Justice League and Marvel rocked us with the Fantastic Four. By the time the Groovy Age was getting underway, the Justice League, Fantastic Four, and Avengers were holding steady, but the Doom Patrol, Metal Men, Blackhawks, Teen Titans, Legion of Super-Heroes, and the X-Men were on their last legs. 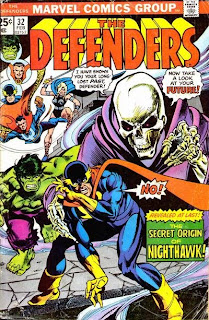 Things kind of went up and down for super-teams for a couple of years. The Inhumans got a strip in Amazing Adventures. Kirby went to DC and gave us a team of gods, the New Gods, and revived the Newsboy Legion in Jimmy Olsen. Roy Thomas played around with teaming the Hulk, Sub-Mariner, and the Silver Surfer in a couple issues of Subby's mag, and that morphed into the Defenders (in which the Surfer was quickly replaced by Dr. Strange). The Defenders clicked. Suddenly, here was a super-team comics fans went a little bonkers for. Not long after that, Cary Bates and Dave Cockrum renovated the LSH in Superboy--another hit! 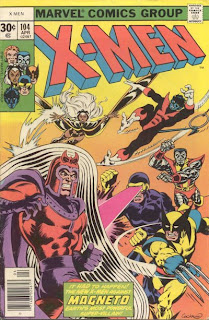 Then in early 1975, Marvel released two new teams in their "Giant-Size" format: the Invaders and the All-New, All-Different X-Men. Soon, Marvel followed up with the Champions and revived the Inhumans and the Guardians of the Galaxy. DC got into the act by bringing back the Justice Society in the revived All-Star Comics, and putting the Teen Titans, the Blackhawks and the Metal Men back into their own titles. DC created a team of super-villains and gave them their own mag with the Secret Society of Super-Villains. The New Gods were put back on DC's schedule (sans Kirby), and they gave us a new Doom Patrol in their revival of Showcase. Marvel even teamed their monster-heroes up in an issue of Marvel Premiere and called them the Legion of Monsters. Super-teams were hot again, and have rarely cooled down since.

Ol' Groove really dug those team comics. Got all of 'em. There's nothing like the thrill of seeing a bunch of costumed heroes banding together to beat up bad guys. Here are a few quick thoughts on some of my faves: 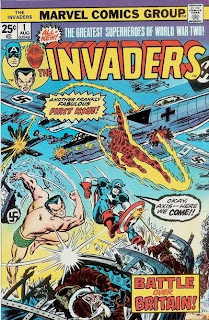 Invaders: Roy Thomas took a one-shot idea he had way back in Avengers #71 (September, 1969) which teamed Captain America, the Sub-Mariner, and the Human Torch, along with side-kicks Bucky and Toro, as a strike force to take the battle right to the Nazis in Europe, nabbed the name he and Stan Lee originally wanted to give to the Defenders, and handed the art chores to Frank Robbins. The Invaders was the perfect mag Robbin's newspaper-strip style of cartooning. His art gave the strip an authentic Golden Age feel, and his knowledge of the details of the era added much needed realism. Author Thomas would revive old Marvel heroes (the Destroyer, Liberty Legion), and even create Marvel versions of other companies' Golden Age heroes (Scarlet Scarab, the Crusaders), but he and Robbins were at their best when they created their own heroes of WWII, like Union Jack and Spitfire. They also created some memorable villains, like Master Man, Warrior Woman, U-Man, and Baron Blood. 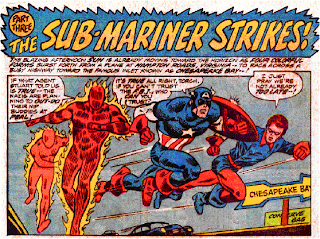 After their debut in Giant-Size Invaders #1 (March, 1975), the team got its own regular comic in May, 1975. The mag ran 41 issues, ending in June, 1979. The Invaders also appeared in their own annual (1977) which told the Invaders' side of their battle with the Avengers (in Avengers #71--what, your forgot already?), appeared in a few crossovers with the Liberty Legion (Marvel Premiere #'s 29-30, January-March, 1976), the Fantastic Four (Fantastic Four Annual #11, Spring, 1976), the Thing (Marvel Two-In-One Annual #1 and Marvel Two-In-One #20, both in the summer of '76), and an issue of What If? (#4, May, 1977) in which the Thomas revealed the Invaders' fate post-WWII. The team has appeared in flash-backs, revivals, and even a new, modern incarnation over the years, but nothing compares to the original run. 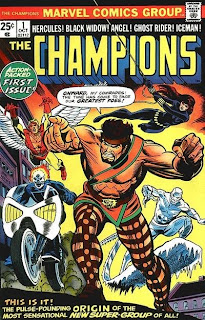 The Champions: In 1975, Tony Isabella had a great idea: team former X-Men Angel and Iceman with his new hero Black Goliath and make them Los Angeles' first super-team, the Champions. But then, according to legend, the editorial powers-that-were (the usually very with-it Len Wein) stepped in and told him that since Black Goliath was getting his own title, he couldn't use him in the Champions. Isabella would have to find another "strong guy" 'cause every super-team has to have a strong guy, so in came Hercules. Editorial also demanded the team have a female member, since every team had to have one, so they brought in the Black Widow. Then, editorial decided every team book should have a member who has his own mag (for sales' sake). Didn't Isabella have to give up Black Goliath for that same reason? 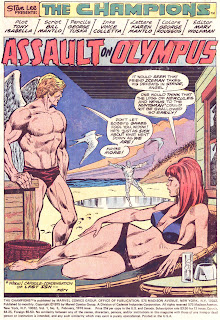 So they shoe-horned in the Ghost Rider. Oh, one more change: too many characters in dark blue/black (Angel, Black Widow, and Ghost Rider), so the Angel, who had the coolest costume of all, got stuck with the most hideous red-and-yellow ensemble (complete with open chest and headband!) ever to appear in a Marvel comic. Did I say "one more change"? Oops. The Champions was to have been part of Marvel's Giant-Size quarterly line, but that line was cancelled, so the debut story had to be reworked into a multi-part epic to fit in the standard comic length. So onto the stands limped the Champions #1 (June, 1975), sporting a gorgeous Gil Kane/Dan Adkins cover. The interior art was uninspired, handled by Marvel workhorse Don Heck who by that time was probably bored to death with superheroes. Despite all the hassles, though, Isabella managed to pull off a fun mag. He managed to give the Champions a great hook, "heroes for the common man" and come up with a really topical and fun villain in Rampage, the first super-villain ever created by an economic recession! Heck was quickly replaced by George Tuska whose powerful figurework and storytelling skills livened things up considerably. Still and all, this wasn't the mag Isabella had wanted to write, so he left with ish #7 (May, 1976) passing the writing chores on to Bill Mantlo who added some interesting supporting cast members, including a new Russian-super-villain-turned-heroine, Darkstar (who made her debut under Isabella).

Emerging super-star John Byrne took over the art chores for a few issues (11-15), but the series was cancelled with issue #17 (October, 1977). Too many creative changes, too little focus. The team was officially disbanded in Spectacular Spider-Man #'s 17-18 (January-February, 1978). The Champions crossed over with a few other Marvel comics: Super-Villain Team-Up #14, Ghost Rider #17, Godzilla #3, Iron Man Annual #4, and Avengers #163. The Champions had become sort of a "in-joke" at Marvel over the years, but was recently revived as the Order (since Marvel had lost the rights to the Champions trademark to Heroic Publishing back in the 1980s). 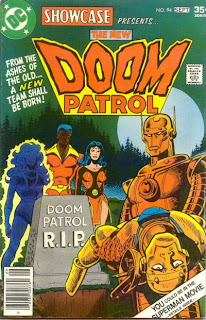 Doom Patrol: Inspired by the success (and carrying on the tradition of giving fandom the fun of comparing the two teams' similarities) of the All-New, All-Different X-Men, DC handed the chore of creating an all-new, all-different Doom Patrol to the able hands of Paul Kupperberg and Joe Staton in the newly revived Showcase #94 (May/June, 1977). Though Kupperberg and Staton took on pretty much the same trappings of the All-New, All-Different X-Men, with the introduction of international members (Celsius from India, Negative Woman from Russia, and Tempest from the U.S.--but with the added dimension of being a Viet Nam vet/deserter) and keeping a former member Robotman on the team (serving as DP's link to the old team, as Cyclops linked the old X-Men to the All-New--aw, you know who I'm rappin' about), the feel of the team was quite different. This team was more edgy, less of a team than a group of individuals thrown together by circumstances. Kupperberg's scripting was as with-it as any Marvel scripter's, and he was able to give the series a very dark, dangerous feel, very different from the usual DC fare. 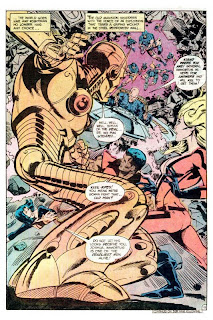 Staton's art was glorious, from his faux-Dave Cockrum costumes for the new members to his Rog-2000 inspired redesign of Robotman (which from what I've been able to gather Rog creator John Byrne kinda dug, especially since he and Joe had been buds working at Charlton), he gave the Doom Patrol a good, solid artistic identity. The try-out, which ended with Showcase #96 (August/September, 1977), sadly didn't lead to an ongoing series. The new Doom Patrol was relegated to occasional guest appearances such as Superman Family #'s 191-192 (July-September, 1978) and other mags in the 1980s. The DP has been revived a few more times since the Groovy Age, and is due yet another shot at starring in their own mag later this year.

Whew! Did I say "a few quick thoughts"? I'll have to return to this topic later, Groove-ophiles! Still lots of teams to cover! Meantime, what are some of your fave super-groups of the 1970s? Which ones would you like me to give more in-depth coverage to? Let me know, 'cause Ol' Groove aims to please!