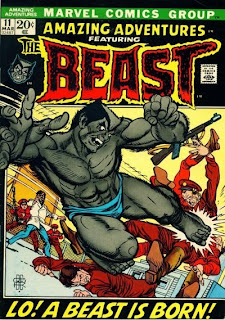 Season's Greetings, Groovesters! Today we're gonna rap about a Christmas gone wrong. Poor Hank McCoy. The man had just left the X-Men (where he was known as the agile and articulate Beast) to start a life of his own. Dreams of a normal life, thanks to a mutant ability-removing potion he was working on, danced in his head. However, the folks at Marvel (namely writer Gerry Conway, artist Tom Sutton, and editor Stan Lee) had other plans for the first graduate of Xavier's School. Those plans involved mutating Hank further, by covering him with gray fur and giving him even more powers like a limited healing factor. Sounds like a real bummer, huh? Well, I'll not spoil it any more for ya. If you want more info on the Beast's run in Amazing Adventures (issues 11-17), you can click here. Now it's time to dig back into the Groovy Agent's vaults for the premiere episode of Mrs. McCoy's bouncing baby Beast's solo series. Check it out! From December, 1971, here's Amazing Adventures #11's... "The Beast!"

Posted by The Groovy Agent at 6:29 AM