Holiday Tales Bonus! The Marvel Family in "The Year Without a Christmas!" 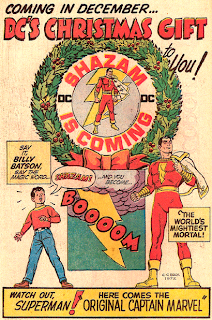 You probably know the story. DC came out with Superman in 1938, creating the superhero craze that still exists to this day. Sometime in 1939, Fawcett Comics created Captain Marvel, another superhero who, at one point in the 1940s, was outselling Superman. DC sued Fawcett for copyright infringement, and in 1953, won their case, forcing Captain Marvel's cancellation. For nearly 20 years, Captain Marvel and his pals lingered in limbo, their only hold on the public consciousness being Gomer Pyle shouting their magic word on occasion. In 1972, though, DC acquired the rights to Captain Marvel and decided to publish "the Big Red Cheese" themselves. Everyone thought it was going to be "the next big thing" (even if they did have to call the comic "Shazam", after Captain Marvel's power source/mentor, to avoid copyright problems with Marvel Comics' space-born superhero, Captain Marvel). The first issue came out between Thanksgiving and Christmas of 1972, and it was fun, but it didn't set the world on fire. Shazam lasted just over five years (35 issues, the last published in February, 1978) before becoming a back-up feature in World's Finest Comics (issues 253-282) .

UPDATE: This has nothing to do with Christmas, the holidays, or the Marvel Family story above, but it's so cool I had to share it with ya! Groove-ophile Planettom has created a Killdozer flash game, and man, is it far-out! Check it out here, then visit Planettom's site for more groovy games!
Posted by The Groovy Agent at 6:31 AM