Groove's Faves: "Lair of the Lost!" by Englehart, Starlin, and Milgrom

Hiiiiiii-YA, Groove-ophiles! I don't know about you, but I feel like kicking back with some high-flying Master of Kung Fu magnificence in the Starlin Style! MOKF #17 (January 1974) was actually the official first issue of MOKF (the mag's official title up to that point had been Special Marvel Edition), but ironically, t'was co-creator Judo Jim's final ish as artist. The ish is also important as it introduced major supporting character, Black Jack Tarr. Black Jack would turn out to be Shang Chi and company's version of Ben Grimm--the strong, brassy, yet loveable, curmudgeon with a heart as big as all outdoors. Besides all of that, "Lair of the Lost!" is a groovy tale that starts off with a bang (how many comicbook characters get to beat up their creators?) and ends with a moving, thought-provoking character piece--the type of which MOKF would become known and legendary for. Dig in as Steve Englehart, Jim Starlin, and Al Milgrom serve up the chops! 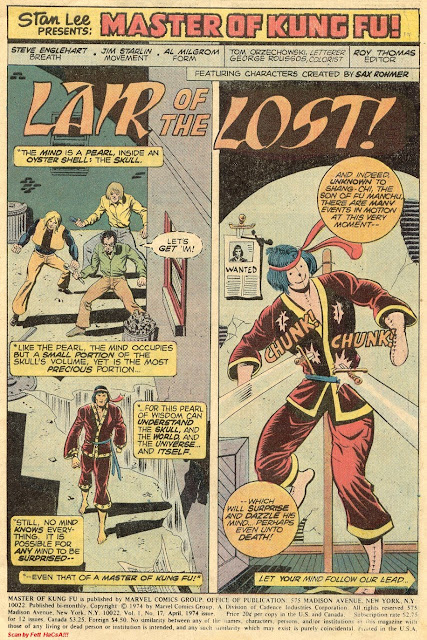 (Special thanks to Fett HaCsA!!!! for the suh-WEET scans!)
Posted by The Groovy Agent at 12:02 AM