Most kids reading Marvel Comics during the Groovy Age dug the art of Herb Trimpe. Besides making himself "the" Incredible Hulk artist for most of the 1970s, he left his unique artistic mark on tons of mags like Iron Man, Marvel Feature (starring Ant-Man), Marvel Super-Heroes featuring the Phantom Eagle (his co-creation), Godzilla, and even the odd issue of Captain America. Herb's Kirby-inspired action-packed figures, his mastery of drawing authentic weapons, vehicles, and machinery, and his incredible storytelling skills made him a Marvel mainstay well into the 1990s. (If you're interested in Herb's life-story, mostly in his own words, you'd do well to read this awesome article at Comic Book Resources.)

While Herb is best-remembered for his superhero work in general and his nearly 100 issues on Incredible Hulk in particular, Ol' Groove finds it kinda cool that Herb's big break from running the photostat machine and providing the occasional ink-job was in that nearly-forgotten corner of Groovy Age Marvel--the western mags! Here's Happy Herb penciling and inking his heart out on Kid Colt, Outlaw #134 (February 1967) on a leather-slappin' script by a young Denny O'Neil, "Shoot-out at Hooker Flat!" 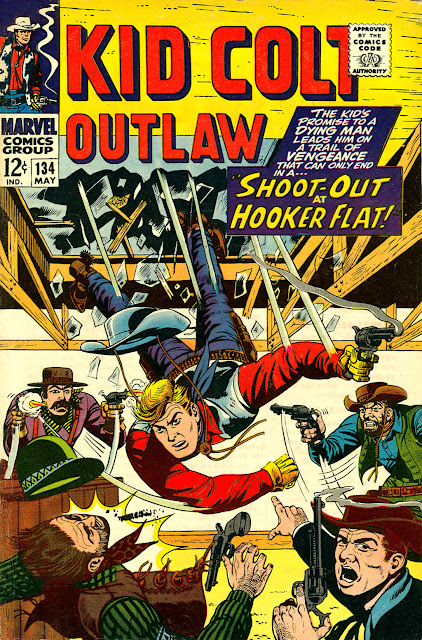