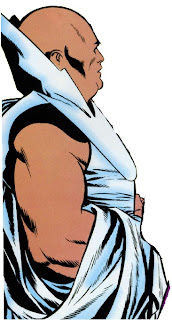 I hope that you have been enjoying the Groovy Agent’s blog as much as I have. If you have, drop him a line and tell him. It is always great to hear from people when you put in a lot of work.

At Marvel, when Stan Lee was running the show, he knew the importance of giving his readers what they wanted. When he cancelled a series he tied up whatever loose ends within the last stories of that series. For example, in his last issue, GIANT-MAN says that he is thinking of retirement (TALES TO ASTONISH #69). In the early 1970s Roy Thomas became editor. Roy had the same respect for readers. When series was cancelled, they had their the story lines quickly concluded in another title, most often the AVENGERS. (NICK FURY and the CAPTAIN MARVEL are examples). By the mid 1970s several series ended abruptly, leaving many loose ends and even cliff hangers. Often, this was because the creators often had little or no notice of the cancellation. This was now a corporate decision not an individual one. While some took “normal” MARVEL time to resolve, DEATHLOK, MAN-WOLF, ETERNALS, BLACK KNIGHT, KOWALSKI (WAR IS HELL), OMEGA and SKULL THE SLAYER took years, leaving at least 100,000 devoted readers up in the air.

So, with Groove’s permission, I turned on my interocitor and contacted and old friend. I asked him to fill us in on some of the loose ends that needed to be tied up. He won’t tell me about new storylines or new incarnations of characters. I asked him to start off with a character we mentioned last time. 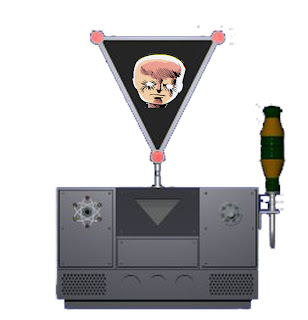 I AM THE WATCHER.

I HAVE PLEDGED NOT TO REVEAL ANY FUTURE PLOT LINES. I HAVE COME TO THIS JOURNEY’S END JUST TO TIE UP THE OLD ONES.

AT THE BEGINNING OF THE MARVEL AGE WHEN A SERIES WAS CANCELLED ALL THE STORY LINES WERE TIED UP. IN THE MIDDLE OF THE ERA, THE LOOSE ENDS WERE OFTEN TIED UP QUICKLY IN ANOTHER COMIC. AT THE END OF THIS ERA, A SERIES OFTEN JUST CONCLUDED, OFTEN WITH LITTLE OR NO EXPLANATION.

MY CONCERN IS ONLY OLD STORY LINES, ONES NOT WRAPPED UP DURING THE GREAT MARVEL ERA. MANY SUCH JOURNEYS ARE POSSIBLE, LET ME BE YOUR GUIDE...
IN AN ONGOING FEATURE CALLED: 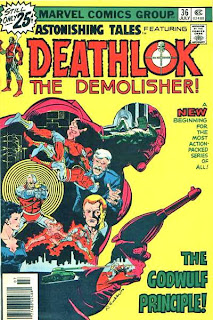 The DEATHLOK cover to ASTONISHING TALES #36 promises a new beginning one. What it doesn’t tell you is that is really the end of the series. It picks up again in MARVEL SPOTLIGHT #33. Deathlok also appears MARVEL TWO-IN-ONE #26-28 and 34. While these are mostly traditional guest appearances, SPOTLIGHT manages to get DEATHLOK into the same time frame as the rest of the MARVEL world. He is sent back to prevent the destruction of the world, set for 1990. We learn that there are alternative futures and he may stop what is to happen. 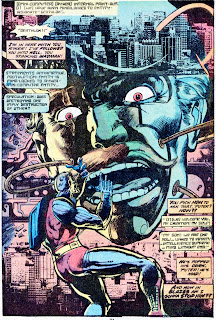 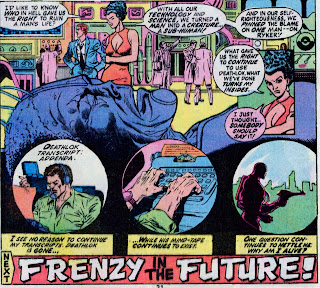 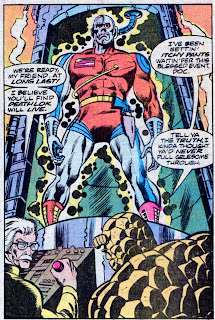 IN MARVEL TWO IN ONE #27, Mentallo and the Fixer use Doctor Doom’s time machine to bring a cloned (duplicate?) DEATHLOK back from 1990 to MARVEL’S present day (1977). They had learned of him when SPIDER-MAN revealed details of his trip to the future (MARVEL TEAM-UP #46). They attempt to program him to kill President Carter, but, of course, their plot is foiled.

Starting in MARVEL TWO IN ONE #28, DEATHLOK is revealed to be a catatonic state and Mr. Fantastic and SHIELD try to restore him for several issues. He finally revived in issue #34. In issue #54 a rebuilt (cloned may be the better word for it) DEATHLOK breaks into Project Pegasus (a military base for developing new weapons and keeping unusual prisoners). He attacks the Thing and Quasar (who looks like Marvel Boy) and is seemingly destroyed. Occasionally referenced is the Luthor Manning clone (originally shown in the last issues in ASTONISHING TALES) and his connection to Deathlok. 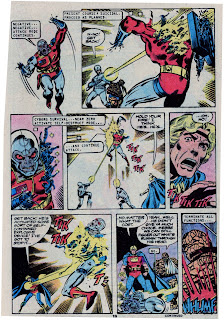 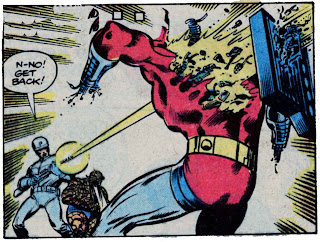 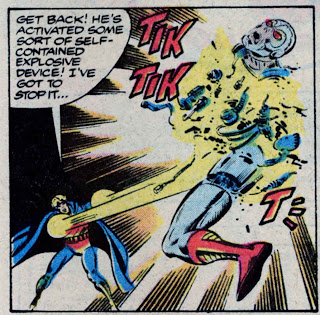 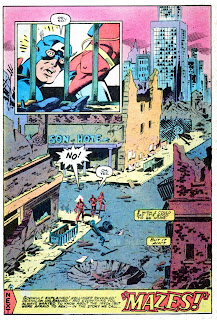 IN CAPTAIN AMERICA #286-9, Godwulf, a warrior fighting against the Brand Cooperation, fills us in, “Starting in the mid 1970s it was employed by the Brand cooperation. One of its offshoots actually, the Nth Command—a clandestine group devoted to the development of the nth projector…a device cable of opening holes in our reality…and an infinite number of alternative ones. What Brand…and its parent corporation wanted purged were America’s super-powered beings. The mission took years of careful preparation—but that preparation paid off when—one fine day in 1993—(the) groups infiltrate the headquarters of the Avengers, Fantastic Four, Defender and the X-Men…using our nth projectors to beam the lot of hostile realities where instant death resulted. So with the major roadblocks to their supremacy removed, Roxxon did what it had wanted to for years—launching its revolutionary forces in an attempt to take complete control of the United States.”

The original DEATHLOK was now re-programmed as an agent of Nth Command (the bad guys), who had been developing their Operation: Purge. In 1993, Godwulf sent the Luther Manning clone back in time to locate DEATHLOK. DEATHLOK kills his counterpart, but not before Manning is able to restore DEATHLOK’S memories. This also cancelled his programming. (This all gets back to one MARVEL’S original concepts. The hero somehow fights himself. Here, uniquely, there are several versions of the original. And just who is the original Manning or DEATHLOK?) CAPTAIN AMERICA now travels with Deathlok to his future. Cap sees the devastation and hears of the defeat of the super-hero teams. They meet with Godwulf and his Redeemers who are named Sage, Big Man, Iron Butterfly, Gentle Sam, and Swashbuckler. Combined, they are able to defeat an army of mechanical soldiers controlled by Hellinger. Hellinger is killed by Deathlok when he tries to take control of Deathlok’s computer circuits. CAPTAIN AMERICA travels back to his own time, with knowledge of what can happen. He shuts down the Nth command and prevents Operation: Purge. This creates another “second” reality, an alternate future, something Marvel has become comfortable with since WHAT IF?

In Looking Back one can see so much of what will be the TERMINATOR movie series. The look of DEATHLOK, the part man part machine aspects, how he was built, the destruction of the Earth in the future and the mission of a cyborg to prevent it. Perhaps no other characters had so many identities, clones, replicas, copies and alter-egos. It must have been difficult for causal readers to keep up. It is interesting that while Manning could not find his soul, MACHINE MAN found his.

MANY SUCH JOURNEYS ARE POSSIBLE, LET ME BE YOUR GUIDE...

MARVEL TWO-IN-ONE #34 (June 1977) **
“A Monster Walks Amongst Us”
Edited and Written by Marv Wolfman; Drawn by Ron Wilson; Inked by Pablo Marcos; Lettered by Bruce Patterson; Colored by Sam Kato