He was a sound effect (Green Lantern/Green Arrow #84)! He was the original Swamp Thing villain (House of Secrets #92)! 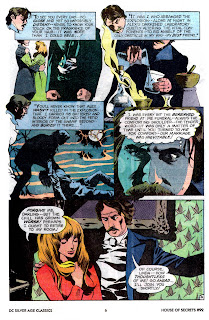 He was a founding member of the Studio! Who is Michael Wm. Kaluta? Here's what he has to say about himself; Ol' Groove says he is one of the most incredible illustrators to ever grace the pages of a comicbook!

Kaluta got his start in the late 60s, doing strips for fanzines, Charlton Comics, and even undergrounds. Around 1970, he got his big break at DC Comics, doing covers and strips for their mystery/horror line.

In no time, he was the regular artist for Edgar Rice Burroughs' Carson of Venus, the back-up strip in DC's Korak, Son of Tarzan. He had a wonderful (though brief) stint in the back of the Phantom Stranger comic on the Spawn of Frankenstein. 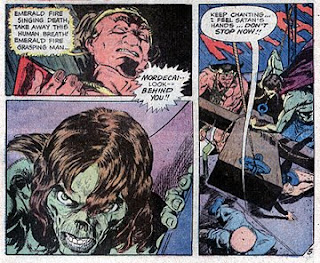 And of course he produced tons and tons of covers for DC, everything from superheroes to mystery/horror to sci-fi to war. Then came his most famous work: adapting pulp hero the Shadow along with writer Denny O'Neil (issues 1-4, 6). Only five issues, but they were the stuff of legend. Detailed rendering, perfect mood and staging, topped by such attention to authentic detail of the 1930s that it looked like it had actually been illustrated in the 1930s! Such attention to detail made it impossible for an artist of Kaluta's caliber to meet deadlines, so the rest of the issues, while beautifully illustrated by Frank Robbins and E.R. Cruz, just don't compare. 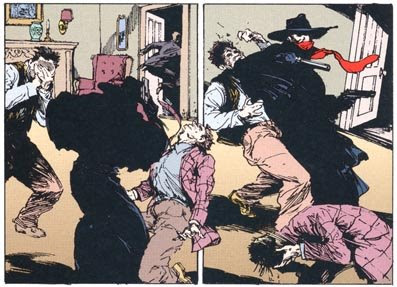 While doing posters and art prints for the Studio, Kaluta filled the rest of the Groovy Age with some of the coolest covers that ever fried your brain. Superhero covers? Kaluta could deliver:

Comics and illustration alone couldn't contain all that talent. In the early 80s, Kaluta co-created the stage play Starstruck with playwright Elaine Lee. In the mid-80s, he collaborated with Alan Parsons Project on the Don't Answer Me video.

Still in all, Kaluta has kept his hand in the comics world, working on a variety of projects. Things like strips in Heavy Metal magazine, the graphic novel/comicbook adaptation of Starstruck, working with his pal, the late Dave Stevens on the Rocketeer Adventure Magazine, and of course, lots more far-out covers like these:

Sing it loud, sing it proud: "Kaluta, Kaluta, Ka-luuuu-taaaaaaaaa!"
Posted by The Groovy Agent at 12:46 PM