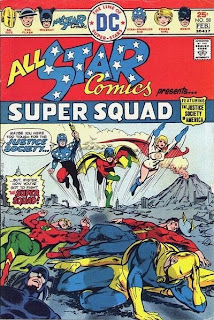 Welcome back, Groove-ophiles! I'm comin' at'cha with a new semi-series, Famous First Fridays. Every Friday (at least, that's the plan) I'll be layin' a "famous first" on ya, whether it be a first issue, first appearance of a great character, first story by a fave writer or artist, or maybe even the first issue of a particular comic I ever glommed on to. You catch my drift? Good! Then, onward!


I was trying to think of something special to start off with, and I thought back 33 years to the return of All-Star Comics and the debut of the captivating cousin of the Earth-2 Superman, Power Girl! PG (as we came to call her) was created by writer Gerry Conway and designed by Joe Orlando, Ric Estrada, and/or Wally Wood (the world may never know) for All-Star Comics #58 .

Right from the beginning, we all knew PG was gonna be the coolest chick in comicdom! Just check out her dynamite debut: 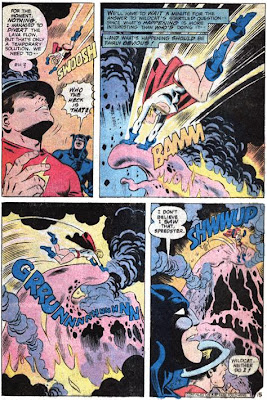 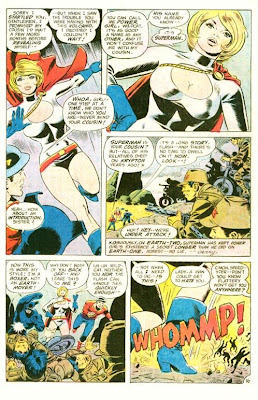 For years, fans had wondered if there would be an Earth-2 version of Supergirl. The answer was yes and no. Yes, we got Kara Jor-L, but man, she wasn't your daddy's Supergirl! A little older, quite a bit more of a feminist, and a LOT more--eh--developed. For once, DC was stirring things up. And guess what? It WORKED. Comics fans went wild for PG, and she's pretty much remained a constant force in the DCU: she survived the (in)famous Crisis on Infinite Earths (while her Earth-1 counterpart Supergirl did not); starred in a few mini-series; and, of course, has held membership in both the JSA and the JLA.

Posted by The Groovy Agent at 3:38 PM