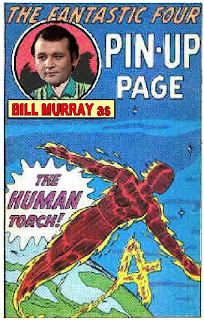 What it is, Groove-ophiles! Here's a bit of way-out wackiness for ya! Back in 1975, I remember an item (it was either Stan's Soapbox or a Bullpen Page item) about a Fantastic Four radio show. I never got to hear it, but I recently bumped into a site running 10 episodes from the series. According to my research, the show ran five days a week for 13 weeks, so there are still a lot of episodes to be tracked down. Still, ten's better'n nuttin' so give these a listen! (Courtesy Internet Archive.) 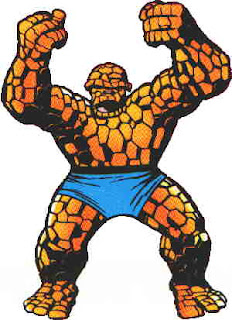 Yep, that's Bill Murray's voice you hear spouting the words of Johnny Storm, aka the Human Torch. Now you know what he was doing to pass the time until Chevy Chase left Saturday Night Live! Other voice actors include Bob Maxwell as Mr. Fantastic, Cynthia Adler as the Invisible Girl, and Jim Pappas as the Thing.

For the secret origin of the show, here's an interview with Peter B. Lewis, the brains behind the broadcasts.

Enjoy the shows, and I'm outta here!
Posted by The Groovy Agent at 8:39 AM