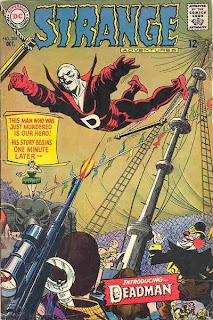 I can't wait any longer! For sixteen days I put it off, but Ol' Groove is only human. I can't go another day of...

without sharing the story of my all-time favorite supernatural superhero, Deadman!

Created with equal parts desperation and inspiration by Arnold Drake, designed with class and dynamism by Carmine Infantino, and made legendary by the stunning art of Neal Adams, Deadman was the character that truly broke the DC mold. 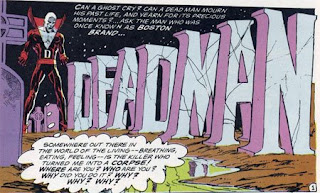 Boston Brand (Deadman's alter ego) was an unlikeable show-off with a chip on his shoulder that was matched in size only by his ego. He was a trapeze artist for a flea-bag circus. He was murdered by seemingly random circumstances by a one-armed man who was being initiated into a secret crime society. His one act of kindness toward an Indian fakir granted him the power to posses the bodies of others as he tried to track down his murderer. No rich playboys out for revenge, here. No strange beings from other planets, noble police scientists, fearless test pilots, or policemen from other planets. Marvel Comics had been stealing DC's thunder by nabbing the college crowd for most of the Silver Age. Now DC was going after the grown-ups! 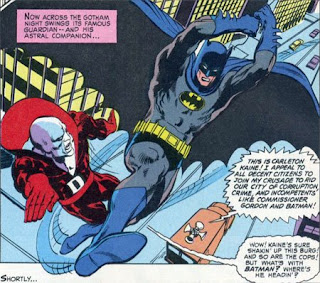 I first discovered Deadman's origin when it was re-printed in the back of Brave and the Bold #97 (May, 1971), and immediately flipped over the character. I was just getting serious about comics (I'd picked 'em up now and again, but looked at the pictures and lost 'em, traded 'em, or whatever...but by 71, I could actually read 'em!), and Deadman was like nothing I'd ever seen. In his origin story he was mean, sullen, and yet there was a cool factor about him. And the idea that he was really dead...that he had to actually die to get his powers? Man, Young Groove really dug that for some reason. B&B kept reprinting those Deadman stories from Strange Adventures (issues 205-216), and I kept reading--and loving--them, especially when Neal Adams took over the art chores. Now those team-ups with Batman in earlier issues of B&B (#s 79 and 86), as well as those cool back-ups in Aquaman (issues 50-52, December, 1969-March, 1970) made a lot more sense.

But Groove, you're saying, this is a First Friday. Let's have the origin, man! Okay, first up is the creation of Deadman, in his creator Arnold Drake's own words (from the Deadman mini-series, issue #1, February, 1985): 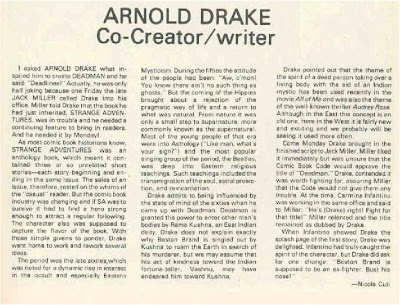