Werewolf Week! Batman in "Moon of the Wolf" 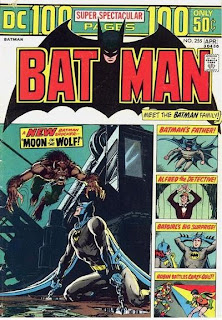 Come in quickly, Groove-ophile! It isn't safe outside! There were two full moons last week--and there are a few lycanthropic lurkers still around. They're breaking the rules because they know that this week is Werewolf Week as we continue on our...

Even a man who is pure in heart
and says his prayers by night
may become a wolf when the wolfbane blooms
and the autumn moon is bright.
For some reason, werewolves have always been Ol' Groove's favorite creatures of the night. I never understood why. Maybe it was the fact that in the old Universal Movies, Larry Talbot was a good guy trying to free himself from a curse he didn't deserve. Most comicbook werewolves were usually decent folk trapped in their curse by no fault of there own, as well.

Batman #255 (December, 1973) is quite a mag. Not only is it one of those fabulous 100 page issues, but it is artist Neal Adams' last full-length Batman tale. That in itself makes the comic worth checking out, since Adams' Batman is pretty much the definitive version for droves of Bat-fans. It's also special because it is one of the rare times that Len Wein, who was definitely a super-star at that point with Phantom Stranger, Justice League, and of course, Swamp Thing already on his resume (Wein would return to the Batman near the end of the Groovy Age to leave his masterful mark on the character). The only thing that didn't really make sense is that the story was released in December, rather than October. Oh well, it's still neat.

Enough talk, Groove! Let's get on with the story already! 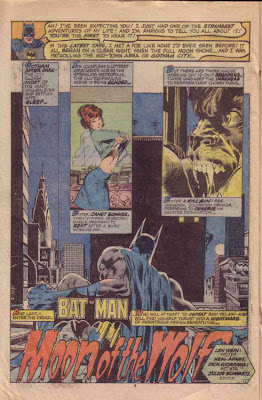 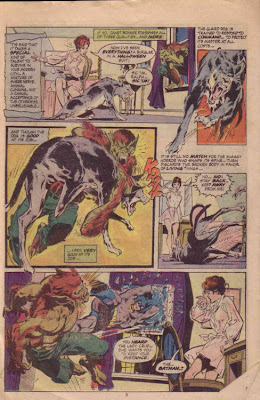 The fight doesn't last long. The werewolf gets past the Batman, grabs the girl, and tosses her out the window. The Caped Crusader then uses his handy bat-rope to swing out the window and capture the girl, which (naturally!) allows the werewolf to get away. After getting the girl to safety, the Batman stops by for a chat with Commissioner Gordon. The Dark Knight Detective fills the commissioner in on his latest case, and Gordon informs our hero that two Alaskan timber-wolves have been stolen from the zoo. Gordon's instincts tell him that the Batman's Wolf Man and the robbery must be connected. No wonder the Caped Crusader hung out with Gordon so much. He's a really smart guy... 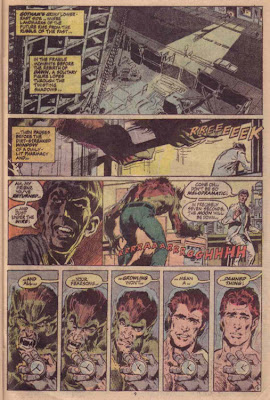 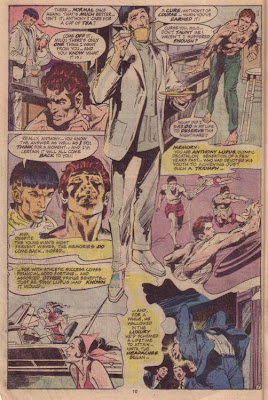 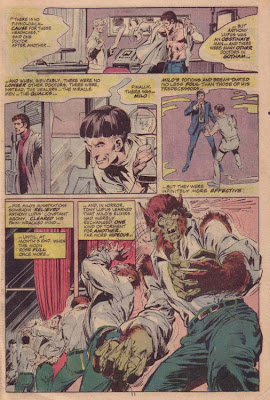 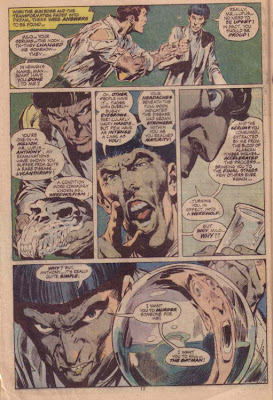 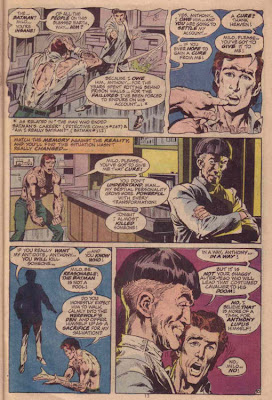 That rotten Professor Milo, taking his failures out on our hero! Don't do the crime if you can't do the time, ya geek! Anyway, as the story continues, we learn that Lupus is a pal of Bruce Wayne's. While they're working out at the gym, Lupus let's Wayne know he has a check for charity--if the Batman would come and pick it up. Wayne tells Lupus that he won't have to worry about tracking the Batman down, because once our hero hears of Lupus' generosity, the Batman'll find him. A short time later, the Caped Crusader shows up on Lupus' balcony asking for the donation, surprising Lupus not one bit ("Oh, yes--that! Please join me in my study and I'll write you a check!"). Once in the study, Lupus shuts the door and offers the Batman a drink. Naturally, our hero politely refuses (yeah, the real Batman was polite, dangit!) and mentions that it's getting rather warm in the room. Realizing that he's being gassed, the Caped Crusader reaches out and grabs Lupus by the shirt, tearing it as he falls. (Unfortunately, it seems that the real Batman wasn't quite as infallible as other versions. Maybe he should've consulted Gordon before visiting Lupus...)

Lupus turns the Batman over to Milo who chains him to the grounds of a rainy construction site, intending to turn the Wolf Man loose on our hero... 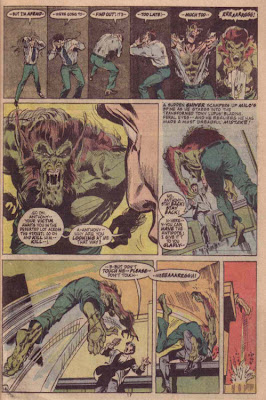 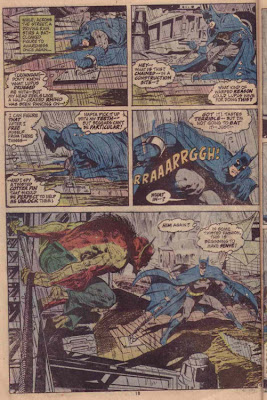 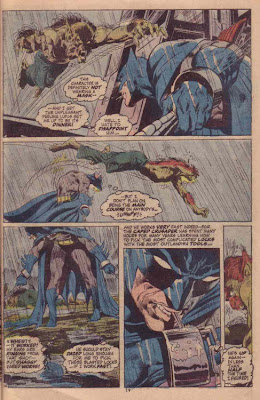 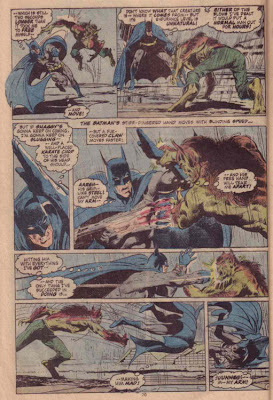 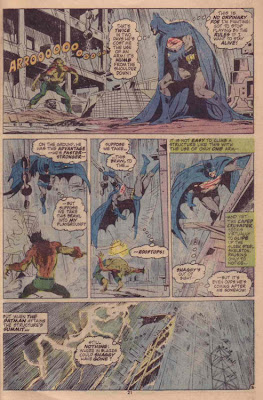 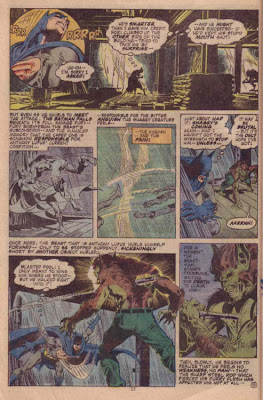 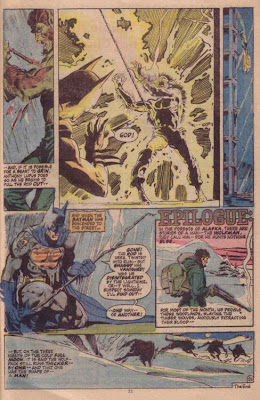 Julie Schwartz wasn't jivin' when he had 'em call this story "A New Batman Shocker" on the cover, was he? Hope you dug our trip down Lycanthropy Lane, Groovesters! Be back tomorrow to watch Wein work his wizardry with Bernie Wrightson on "Monster on the Moors"! Til then, stock up on silver bullets!