If You Blinked You Missed: Ms. Flash

Greetings, Groove-ophiles! Shades of Supergirl, Batgirl, Spider-Woman, She-Hulk, and Ms. Marvel! Can you believe DC actually had a female super-speedster called Ms. Flash? They did! So why haven't you ever heard of her? Why hasn't she popped up at all in the last 33 years? Has Ol' Groove lost his ever-lovin' mind? Sit back and learn, Grasshopper...

Back in June of 1977, y'see, DC unleashed the first of their DC Special Series with Five Star Superhero Spectacular, an 80 page Dollar Comic that definitely lived up to it's unwieldy title. It featured the Flash, Aquaman, the Batman, Green Lantern, and the Atom in fun, well-written, finely illustrated tales gathered together under a smashing Neal Adams cover. For each feature--especially for those who had their own titles--which was everyone except the Atom, now that I think of it-- editor Paul Levitz wanted to give them a different twist; something to make them special and not just a teaser for what fans would get in the heroes' regular mags. Sometimes he'd turn a writer or artist who'd never taken a shot at Aquaman or Green Lantern, f'rinstance. Sometimes he'd pit a hero against an established villain he'd never before faced a la the Batman/Kobra tale. And there was this time with the Flash in which Levitz hired the Flash's regular creative team of Cary Bates, Irv Novick, and Frank McLaughlin to do something quite different from their regular mag. To this end, Bates, Novick, and McLaughlin gave us "How to Prevent a Flash!", a story focusing on Barry (Flash) Allen's police scientist side as well as a really neat twist on a rarely-explored aspect of the Flash's powers.

When you finish reading this far-out fable, Groove-ophiles, you'll find that Ol' Groove is really tossin' ya a twist like none other--'cause if you blink, you're definitely gonna miss...Ms. Flash! Dig it! 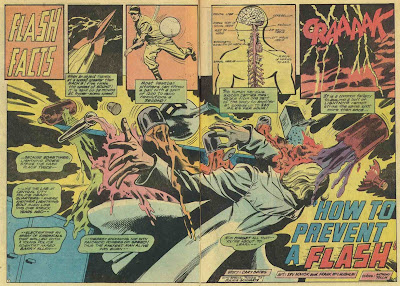