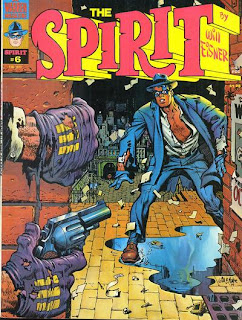 From January, 1974 to July, 1976 Warren Magazines published Ol' Groove's all-time favorite black and white mag, The Spirit. Will Eisner's greatest creation ran for 16 issues (then switched to Kitchen Sink Press where the series continued a long and healthy run). I wanna share my own personal Spirit-ual experience with ya! When I was about 9, I got my first book on comicbook history, Jules Feiffer's The Great Comic Book Heroes. My least favorite of all the stories reprinted in that hallowed book was the Spirit story, "The Spirit in Damascus". Maybe it was because it was the last story in the book and I was tired by the time I got to it. Maybe it was because it wasn't really one of the best Spirit stories. Maybe I was just a dumb little kid. 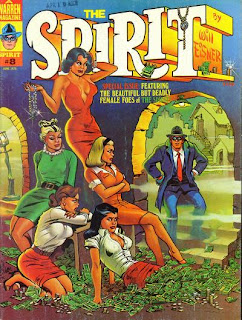 Months passed, and the day before Thanksgiving, 1974, after looking at all the comics on the spinner rack, I started looking at the magazines. I noticed the cover of The Spirit #6, and man, did it ever grab my attention. Two purple-gloved hands were reaching around a corner, pointing a gun at the Spirit, who stood there in torn clothes, a look of total surprise on his face. The littered stone street, the puddle (reflecting the Spirit) running into the sewage grating...I was sold, baby! Problem was, the mag cost a buck and a quarter (while color comics were just a quarter then, remember!), and Young Groove only got a buck a week for allowance. Mom, bless her, remembered reading the Spirit when she was a kid and loved the character, so she bought it for me (even let me spend my buck on a Shadow paperback!). We were both hooked. Every other month, there was no question about whether or not we were gonna get the latest issue of The Spirit--it was a question of who was gonna read it first! 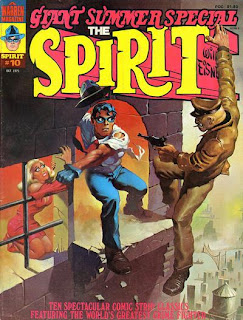 Now, Will Eisner's Spirit is being published by DC, with the whole series available in beautiful hardback editions, "best of" color trade paperbacks popping up, a very cool monthly comic with new stories by some of today's best creators, and a movie, directed by Eisner friend/follower (and comics genius in his own right) Frank Miller. It's a great time to be a Spirit fan, and that ain't jive.

But. There's just something about those Warren mags. Eisner's art looks so great in black and white (with very tasteful gray tones) that, to me, color just doesn't suit it. (Several issues ran a color story in the center of the issue, but even those didn't compare with the black and white stories) When I read the Spirit, I feel like I'm watching a classic black and white movie, simply because of the impact those black and white Warren reprints had on me. So, while all the new stuff DC is putting out is fantastic, for Ol' Groove those Warren Spirit mags will always be dy-no-mite! 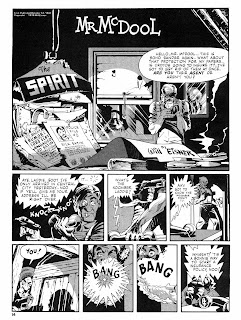 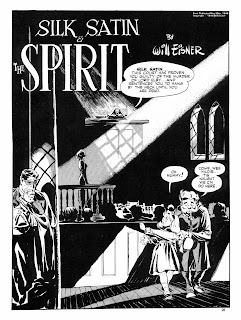 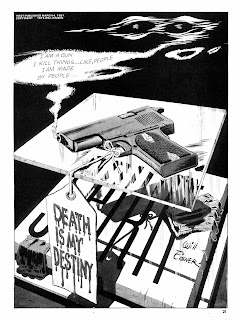 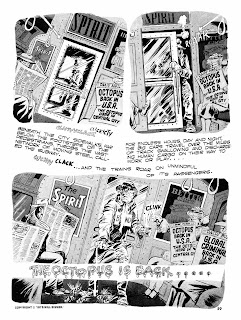 Posted by The Groovy Agent at 6:29 AM