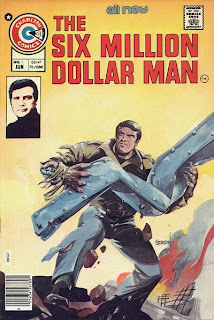 We can rebuild him--we have the technology!

Back in the Groovy Age, superheroes on TV were hard to find except in reruns. We had Super-Friends on Saturday morning, but they were watered down, talky versions of our favorite heroes. In 1973, things started looking up. ABC aired three TV movies inspired by Martin Caidin's excellent 1972 novel Cyborg (which was so successful it spawned three sequels). The made-for-TV movies, which starred the great Lee Majors, were a hit, and in 1974, the Six Million Dollar Man got his own series that ran until 1978. Anybody remember this intro?

Did I say the show was "a hit"? To be honest, the Six Million Dollar Man was something of a phenomenon. The show spawned a spin-off (the Bionic Woman, starring Lindsay Wagner), a line of toys from Kenner, and of course, some great comics from Charlton.

Check out a few of the toy ads that appeared in most comics during the mid-to-late 70s! 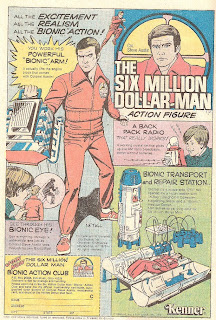 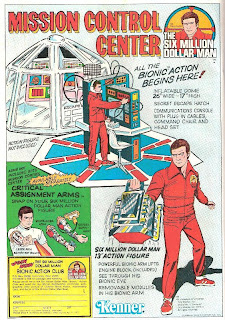 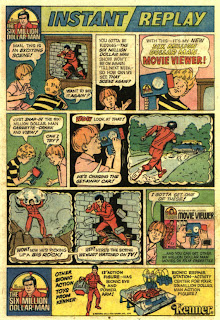 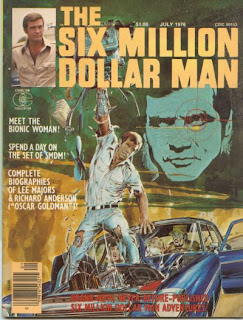 Of course, what Young Groove really dug was the comics produced by Charlton. Those folks had a lot of faith in Col. Steve Austin. Not only did they produce a full color comic featuring the Six Million Dollar Man, but they produced a black and white magazine-sized comic for him to star in as well. The color comic ran nine issues, from March, 1976-March, 1978. The b&w mag ran seven issues, from April, 1976-May, 1977. I thought Charlton did a pretty good job, especially in the early issues when they showcased art by guys like Neal Adams and Joe Staton. The coolest thing was that they stayed pretty close to the TV show as far as characters and characterization (especially in the color comic; the B&W version was a bit darker, naturally, closer to the Caidin novels), but used details from Caidin's novel to flesh out Austin's origins. Just for kicks, whadd'ya say we check out the Origin of the Six Million Dollar Man from the first issue of the color comic, as adapted by writer Joe Gill and artist Joe Staton?

What Ol' Groove really digs is how Gill and Staton took the TV show intro, added details from Caidin's novel, and crafted a perfect intro to Steve Austin for comicbook consumption. Pretty cool, huh?
Posted by The Groovy Agent at 2:15 PM