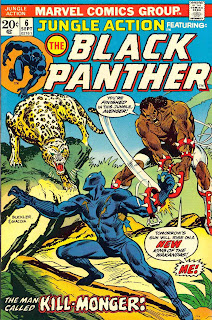 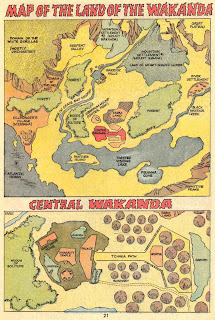 With Jungle Action #6 (June, 1973), though, T'Challa came into his own. With highly-talented Don McGregor at the writing helm, backed with the truly awesome art team of Rich Buckler and Klaus Janson, the Black Panther quickly became one of the most unique, heartfelt, adult, and just plain magnificent comics around. A true labor of love, Black Panther was given real soul when soul was just a buzzword. Torn between his love for America and the Avengers and his duty to and love for his native Wakanda, McGregor made T'Challa the most human and believable of Marvel's heroes. McGregor put his all into the strip, creating supporting characters that seemed to live and breathe; treating Wakanda as a real place--making it as much a character of the stories as any of the people that populated it. He even worked up extras, like maps, text summaries, and various other interesting and unique features--for free!--to keep Marvel from reprinting more Lorna the Jungle Girl stories in the back of Jungle Action. 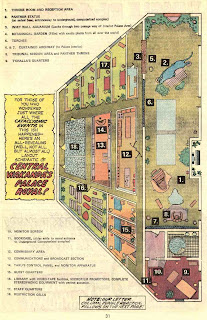 Buckler was only able to stay on as penciller for the first three issues, but McGregor managed to snare the magnificent Gil Kane to do a fill-in issue, buying time for another rising star, the late, great Billy Graham to take over the art chores. Graham brought realism, beauty, and a sensual style that set Black Panther apart from most every other comic on the stands. Graham stayed on for all but two of the remaining issues of Jungle Action. 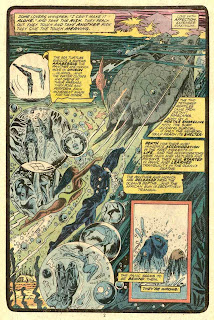 Jungle Action ended with issue #24 (August, 1976), giving way to the Panther finally getting his own solo title. When the Black Panther #1 came out in October, 1976, it wasn't Don McGregor and Billy Graham (or Rich Buckler or Keith Pollard) continuing the "Panther vs. the Klan" storyline that had been running in Jungle Action, but a brand new storyline, written, drawn, and edited by Jack Kirby. Now, it's kinda hard to get upset about Kirby working on any mag, but fandom was a bit put-off by this turn of events. First of all, J.A. had ended with a cliff-hanger, and Kirby gave no resolution--or even notice--of what had gone before. In fact, Kirby's Black Panther was a completely different character than the Black Panther we'd been following for the past three years. While Kirby's Panther was fun, it was all quite confusing. To make things even stranger, when Kirby left the Panther (B.P. #12, August, 1978), the new creative team of Ed Hannigan and Jerry Bingham quickly wrapped up Kirby's unfinished storyline (B.P. #13, October, 1978), then set out to complete McGregor's story (B.P. #14, December, 1978)! Are you still with me? 'Cause we ain't through yet, Groove-ophile! Mixed-up Marvel canceled the Black Panther with issue #15 (February, 1979), leaving the Panther's battle with the Klan hanging once again! Finally, and I do mean FINALLY, the Klan story that began in Jungle Action #19 (October, 1975) was completed in issues 51-53 of Marvel Premiere (September, 1979-January, 1980). Whew! 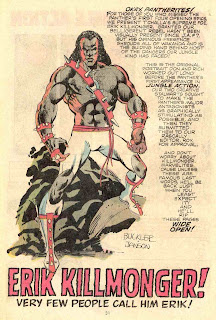 Now, if you're head isn't swimming enough, check this out: Marvel has reprinted Kirby's Black Panther issues in trade paperback form. Neither of McGregor's story lines, "The Panther's Rage" and "The Panther vs. the Klan" (nor Hannigan and company's follow-ups) have ever been reprinted. What's up with that, Marvel?