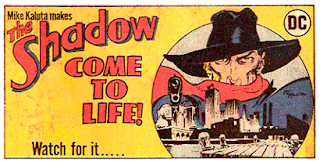 The Shadow. Sherlock Holmes with guns and an attitude. The Shadow started out as the host for Street and Smith's Detective Story Hour waaay back on July 31, 1930, forever capturing his own unique place in pop culture. Less than a year later, in April, 1931, to be exact, the Shadow was awarded his own pulp magazine. Between it and the radio show (which he took completely over, going from narrator to full-fledged star), the Shadow became one of the most popular and influential characters in American pop-culture. The Shadow inspired many comicbook characters (from Batman to the original Sandman and tons in between), so of course he'd eventually conquer comics, as well. By the late 40s/early 50s, the Shadow became just another memory. 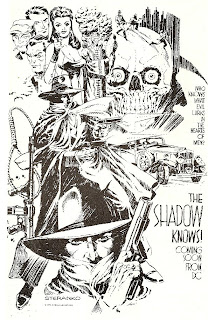 In the mid-60s, probably due to Batmania, there was a short-lived Shadow revival with new paperback printings and an Archie Comic series (check out my pal Jon Gilbert's E-Dispatches from the Great White North post for the story on THAT fiasco). 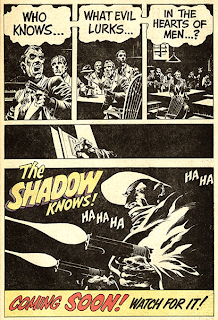 The nostalgia fad was hitting a fever pitch in the early 1970s. Movies, TV, music, and yes, comics were digging out and sprucing up old favorites or creating new homages to the "good old days". DC Comics decided the time had come to do the Shadow right in comics. They hired Jim Steranko as artist, but Steranko wanted to write the mag, too. DC wanted Denny O'Neil as writer, so they passed on Steranko (who went on to do all those magnificent covers for the Shadow paperbacks) and gave the art chores to Bernie Wrightson, who was turning fandom on its ear with his Swamp Thing art. Wrightson quickly realized he couldn't handle two ongoing comicbooks, so the art chores were passed to Michael Wm. Kaluta.

For months, the ads in DC comics promised us the arrival of the Shadow. When the first issue hit the stands in August, 1973, I don't think anyone was disappointed... 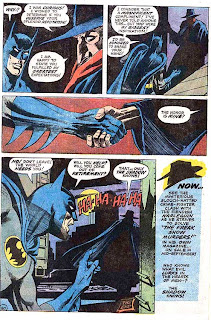 It was a great, if far too short run for the one "who knows what evil lurks in the hearts of men". But you can't keep the Shadow down for long. He made comebacks in both the 1980s and the 1990s (complete with a movie). And as sure as "the weed of crime bears bitter fruit", you can bet he'll be back again!
Posted by The Groovy Agent at 6:52 AM