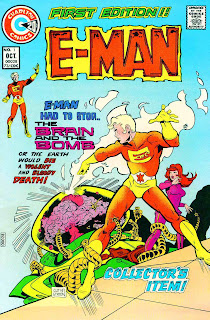 By 1973, Charlton's Action-Hero line was naught but a dim memory. Charlton's output consisted mostly of adaptations of various cartoon characters, westerns, war, and of course, horror/mystery. The Phantom was still around to represent the superheroes, but that was pretty much it. Thankfully, for some odd-yet-wonderful reason, Charlton's powers-that-were gave Nick Cuti and Joe Staton the go-ahead to produce a brand-new superhero: E-Man. E-Man, of course, just happened to turn out to be one of the most original, far-out, and fun characters to populate the pulpy pages of a comicbook in, well, almost ever.

Take a sentient glob of energy, a giant (and eeeeevil) alien brain, and an exotic dancer, mix with some tongue-in-cheek humor and a heaping helping of imagination, and fold with superb and fanciful artwork and you get the recipe for what should have been the mega-hit of the decade. Get ready to fall in love with Alec Tronn and Nova Kane all over again. Here's Nick Cuti and Joe Statons' "The Beginning!" (Characters, story, and art are Copyright Nick Cuti and Joe Staton. Thanks to Mr. BC for the sweet scans.) 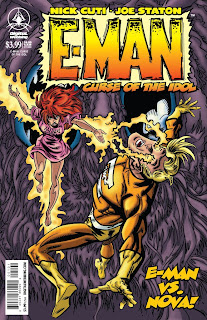 For 10 issues (July 1973-June 1975) Cuti and Staton proved that comics could be hip, relevant, and whimsical all at the same time. Each issue was a gem, blending Marvel-hip, Silver Age DC wonder, and an off-beat underground comix vibe. No one expected anything like this from Charlton. Not enough readers noticed. Sadly, at that time comics were making a darker turn, so E-Man, instead of becoming the Next Big Thing, became yet another failed comic in a long line of truly awe-inspiring cult favorites.

But like Ol' Groove's always sayin', you can't keep a great comicbook character down. In the 1980s, E-Man was revived by First Comics. In the 1990s, Alec Tronn and company popped up at Comico and Alpha Productions. Digital Webbing has produced a few issues here in the 21st Century. Nick and Joe own the rights, they still have the vision and talent, so I'm sure there are more E-Man stories to come. I'll be watching for them, snatching them up, and diggin'' 'em. I hope you will, too!
Posted by The Groovy Agent at 12:02 AM