Hey, hey, hey! What kid in the Groovy Age didn't love Yogi Bear and Boo Boo? After all, Yogi is sa-marter than the average bear! Yogi's been on a lot of folk's minds lately with his new 3-D flick. Ol' Groove hasn't seen it, but thinks it would be fun. Love the voice casting of Dan Aykroyd for Yogi, and surprisingly enough, Justin Timberlake as Boo Boo. But today's post is as much about that great, long-running (nearly 40 years!) give-away comic, March of Comics as it is Yogi. Now, yoors trooly has never been one to get into buying a lot of shoes, except when I was but a Li'l Groove. Why was I so into shoes then? 'Cause I always got my shoes at Sears and they always gave away free copies of March of Comics with each purchase. (Sometimes the sales person would be extra cool and let me nab a fist-full of four color fun!) I can just picture myself back in '69 getting ready for first grade, picking out new shoes--strike that, it would'a been cowboy boots--and picking up March of Comics #337...then laughing all the way home while I read "Trip or Treat" in the back seat! (And yeah, Li'l Groove could read most of the words in this yarn! Thanks, Mom!) 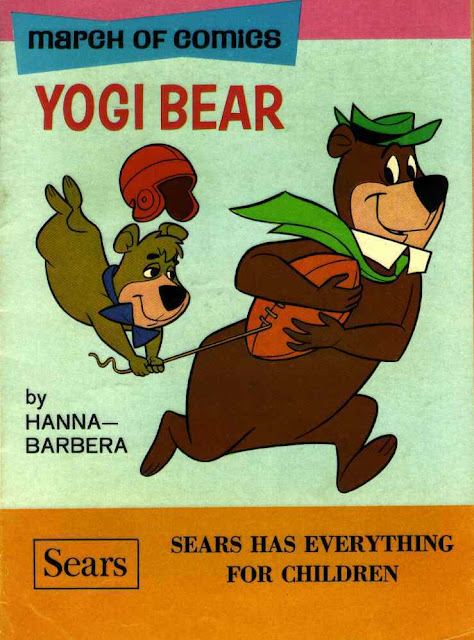