If You Blinked You Missed: The Owl 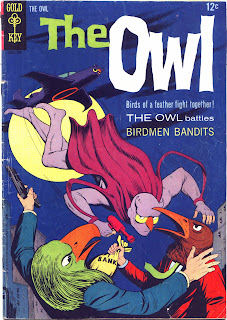 When the Groovy Age was just a-dawning, Batmania ruled the world. Because of this, most every comicbook company, even those who'd rarely (if ever) produced superhero comics started churning them out. Unfortunately, most of them were cashing in on the "camp" craze Batmania had spawned--and not doing it very well. Jerry Siegel, the creator of ever-lovin' Superman, made sort of a mini-comeback during this time, writing Archie/Radio/Mighty Comics' revival of their old MLJ characters. Siegel was also the man behind Gold Key's revival of Dell's Golden Age "Creature of the Night" character (hence the Halloween Countdown tie-in) The Owl. 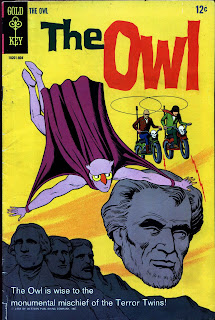 The Owl's mag ran for only two annual issues (January 1967, January 1968), and yeah, it was a hoot (there's no way I was gonna pass that one up). Lone Ranger veteran Tom Gill's art gave the mag a polished look comparable to Gold Key's Hanna-Barbera superhero mags, so the mag looked good in spite of our hero's silly-looking costume. Siegel's scripts were filled with the "hip", campy dialogue he had churned out for the Mighty Comics Group, but the plots were a bit more polished and fleshed out, due, no doubt, to their being full-length stories as opposed to the short one-offs he'd done for the Mighty line.

So, let's set the Waybak Machine for early 1967, back to a time when DC's mags were still polished to a Silver Age sheen, Marvel was marching onward and upward, and cute camp could mix with nostalgia and whimsy to produce comics you could love no matter what your age. From The Owl #1, here's "The Attack of the Diabolical Birdmen"!

But wait, there's more! In July, 1976, Don Glut and Jesse Santos brought The Owl back for one last hurrah, making him part of (their corner of) the Gold Key Universe, in Dr. Spektor #22 (Hey! I haven't covered Dr. Spektor, yet! Man, I gotta fix that and soon!). Santos' art actually made The Owl look less cheesy, and Glut's script was a fun update of the character, making him more "real" without sacrificing any of the hero's past. Here's a sneak peek (including "Dr. Spektor's Special Files", in which we get Spektor's take on The Owl's career):

Wanna see the whole Dr. Spektor/Owl story? How 'bout The Owl #2? All ya have'ta do is ask, Groove-ophiles! Catch ya on the flip-side!
Posted by The Groovy Agent at 12:02 AM