Black and White Wednesday: "The Man Who Became...The Heap" 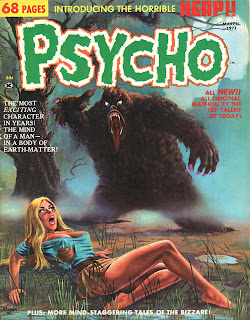 Greetings, Groove-ophiles! It's blog cross-over time! My pal Jazzy Jon "A" Gilbert asked me to do a Heap post for his excellent E-Dispatches from the Great White North blog 'cause he loves, loves, loves The Heap, especially the Groovy Age Skywald version. So you can read my post on Skywald's The Heap #1 by getting thee hence to Jon's blog. Here's a link, just to make it easy on ya.

So what's that got to do with today's post? I said it was a cross-over, didn't I? Well, here's the cross-over part. While researching Skywald's The Heap #1, Ol' Groove remembered that Skywald's version of The Heap actually made its debut months earlier in Skywald's Psycho #2 (cover dated March 1971). It's a black and white comic mag, baby! Tailor-made for a B&W Wednesday post, no?

Anyway, what I really dig about "The Man Who Became...The Heap", besides the ca-razee updating of the original Heap (we'd call that a "re-boot" today, wouldn't we?) is the Ross Andru/Mike Esposito art. Yep, the guys who'd been Silver Age DC mainstays on mags like Metal Men and Wonder Woman, the guys who'd soon become the art team for Amazing Spider-Man, were going nutso on this non-Comics Code approved version of The Heap. I have'ta say, they made him ugleeeeeeeeeeeeee...! And dig it, he's not a "swamp monster" in this version--the text on page 8 makes that abundantly clear, "Jim Roberts stood midst the ashes and charred ruins and surveyed himself--surveyed the sagging layers of tumorous flesh, the rippling, seemingly melted body that would some day be known as THE HEAP!" In you're mind, you've been trained to see the monster as sickly green, gray, and brown, but after reading that...picture The Heap with charred pink skin. Blecchh! Check it out! 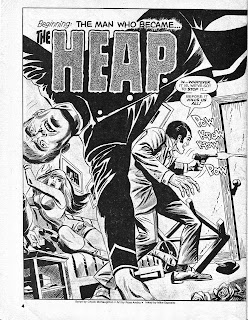 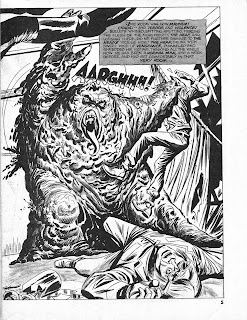 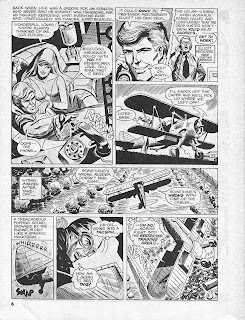 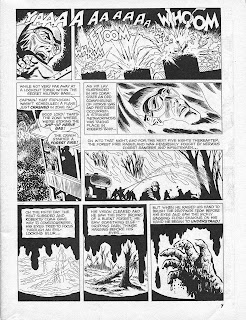 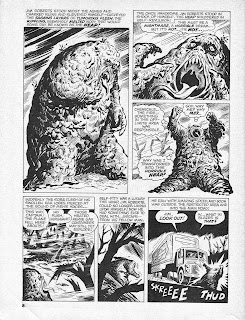 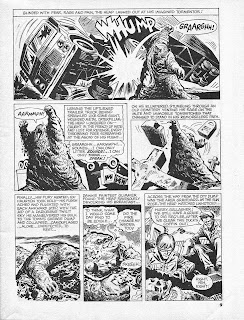 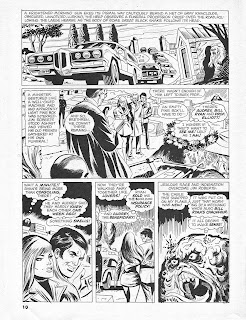 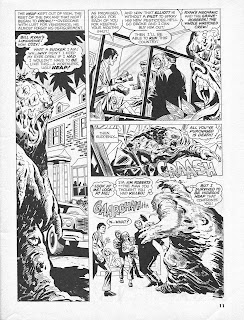 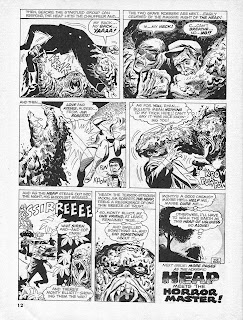 Now, if you haven't already read the low-down behind Skywald's Heap, along with the Comics Code approved color comics debut by Robert Kanigher, Tom Sutton, and Jack Abel, head over to E-Dispatches from the Great White North right now, Groove-ophile!
Posted by The Groovy Agent at 12:02 AM