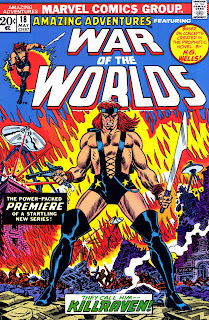 Hey, hey, hey, Groove-ophiles! The Groovy Agent is comin' at ya with another all-time fave--the dazzling debut of Marvel Comics' sequel to H.G. Wells' classic War of the Worlds by Roy Thomas, Neal Adams, Gerry Conway, Howard Chaykin, and Frank Chiaramonte. Amazing Adventures #18 reached out from the spinner rack and jumped in Young Groove's hands back in February, 1973. That Romita cover, man, it just could not be ignored. It looked like a red-haired Conan tricked out in leather standing in the midst of a burning city with a couple'a big honkin' Martian Tripods burning people and property with perilous propensity. And, dude, the red-haired-Conan-type wasn't just carrying a sword, but what looked like a ray-gun, too! And ninja stars! Now, Groove, at any age, has always been a sucker for anything that mixes fantasy and sci-fi, so, as much as I hated to see the Beast go, I was dying to know what was going on in AA #18. I laid down my quarter, got my change (change from a quarter for a comicbook! No wonder I love the Groovy Age!), and entered a brand new world...

...As you can see, it was a world filled with savagery and science gone amok! And speaking of amok, the red-haired-Conan-dude, Killraven is his name, was laying a major smack-down on man and mutant alike as he made his way to the lair of a man he called "Keeper"...

But who was Killraven? Who was Keeper? And what was Marvel up to with this alternate future in which Wells' Martians came back and won? To get the answers to those questions, Groove-ophiles, we have to dig a bit. First up, here is some behind-the-scenes info from Roy's editorial in the letters page of AA #18, "War of the Words"... 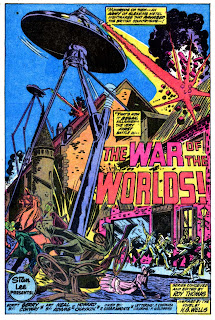 "Two years. That's how long it's taken, friends and neighbors. Two long and not-always-enjoyable years. Circa 1971, Stan Lee asked me to submit a list of ideas for new titles for his own and then-publisher Martin Goodman's consideration..."

(Roy talks a bit about some ideas he tossed out, like Werewolf By Night, Red Wolf, and Ant-Man and Dr. Strange revivals--and yeah, Ol' Groove still has a lot of ground to cover based on that list alone!--He then talks a bit about Wells' novels and the effect it, the Orson Welles' radio version and the George Pal movie and the effects they had on him.)

"The direct inspiration for the story, I suppose, was the chapter Wells called 'The Man on Putney Hill,' in which a visionary artilleryman talks at length about how life will be under the triumphant Martians. Nearly everything set forward in the main line of this series comes from his speeches: earthmen living in drains (read: subways); Quislings who hunt and rule earthmen for their Martian masters; plus a host of things still upcoming and waiting to be developed by the Bullpen Stalwarts. 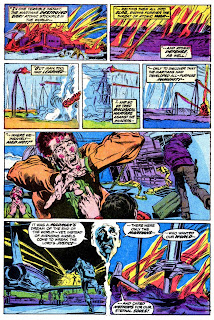 "It took a long time for the opportunity for the series to be begun to present itself. Once it did, though, it occurred to me that nefarious and deadline-dodging Neal Adams was the perfect artist to draw the strip. I presented the general concept to Neal one day over the phone and suggested he stop by in a few days so we could talk it over at greater length; the very next day, he show up--with a whole plotline and lead character, yet. I accepted most of what he wanted to do, with a few changes here and there to bring things in line with my original idea--which included keeping the Martians and their technology almost exactly as Wells had envisioned them (they are, after all, a dying race). The only changes: their destruction of our atomic stockpiles and their biological victory over the germs and bacteria of our world--two crash programs which they would logically have deemed vital before a second invasion attempt was begun.

"Eventually, as deadline time rolled around, problems developed because by then Neal had become immersed in several time-consuming projects, including designing costumes for an off-Broadway (like Chicago) stage musical. (Warp--which I'll cover in my upcoming Blinded Me with Comics blog!) We threw in one reprint of the Beast's origin to give him more time to finish--but, in the end, it was no go, and Neal's sometimes crony Howard Chaykin wound up making virtually his Marvel debut by finishing up the last half of the book nearly overnight. By this time, I too had become too immersed with editorial duties to burn the midnight oil over scripts the way I used to with Neal on X-MEN and AVENGERS, so I sorrowfully but confidently turned the scripting reins over to Gerry Conway..." 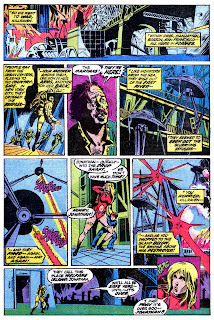 That's how AA featuring War of the Worlds #18 came to be. A couple decades later, both Roy and Neal Adams would flesh out a few more details about the origins of WotW and Killraven. Here's what Neal had to say about the strip's development (quoted from TwoMorrow's Comic Book Artist Vol. 1, No. 3, Winter 1999):

"This character--later named Killraven (by Gerry Conway)--was travelling through his world, collecting things. And he would trade things in order to create and put together technology to fight the aliens. He carried his backpack all of the time and everywhere he went, he would trade off bits of technology for other bits until he could bring the world together, by putting the pieces back together again, to fight the aliens because civilization was being destroyed. "I was putting together a science-fiction concept. This guy, in effect, was the son of Doc Savage--not the Doc Savage, but a Doc Savage-like character. This guy is motivated by instincts he doesn't even understand; he's doing these things, but he doesn't know why he's doing them--he's very good at doing them because he's the son of Doc Savage and he's a wonderful genetically-created person. And he has a twin brother--only he's working for the aliens. To me, that's a set-up for a really good series. 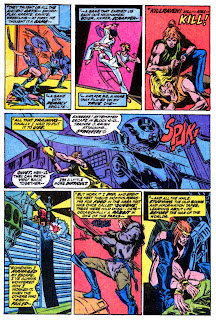 "That concept got lost and, in place of it, was an adventure that didn't actually have progression. My tendency is to move things from point one to point to and on, and when that's not happening, then people jump in and out. It was like what was happening with "Deadman"; the would have writers come in and do a story that would have nothing to do with the last story or anything to do with the next story, so there was no progression. Here, this story was started by Roy and I, and midpoint into it, it was turned over to Gerry Conway again, so I backed out of it. This sounds like a criticism of Gerry again, but it's really not. It has to do with working with the people and and having a relationship, and trusting that it's going to go forward and be positive, and it just seemed to crumble. I felt betrayed."

Referring to the "The Man on Putney Hill" chapter of Wells' War of the Worlds Roy states: "From this material, I hoped to develop a series to appeal to readers who liked Marvel and DC comics based on the fiction of Robert E. Howard and Edgar Rice Burroughs. In fact, a secondary influence on my concept was the ERB-inspired series "The Lost World" which ran for years in the Planet Comics of the 1940s-50s, with a hero named Hunt Bowman."

On Neal Adams' part in the creation of War of the Worlds: "Much as I wanted Neal to draw this feature, this time I found I couldn't go along with all his ideas (mainly the Martian technology as noted in the AA #18 editorial)...Other notions of Neal's did, however, fit in quite well with what I wanted, particularly at this early formative stage. His somewhat Hunt Bowman-like hero, who wanders around gathering up scrap and discarded gadgets for use against the Martians...I found intriguing. Neal had a great name for this character: 'The Junkman.' I'm surprised he neglected to mention that moniker in his interview; perhaps he's forgotten it... 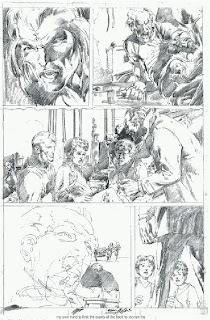 "Naturally, this is not written to denigrate in any way the work that Conway, Chaykin, Marv Wolfman, Herb Trimpe, and others did on the series before Don McGregor and Craig Russell inherited it and proceeded to take it off in new and interesting directions. What would "The War of the Worlds" have been like if Neal and I had stuck it out in tandem? The first near-dozen pages of Amazing Adventures #18, and that single penciled page reproduced in CBA #3, are the closest anyone is ever going to get to knowing."

So, Killraven was to be the son of a Doc Savage-type, and Keeper was "Doc" himself! How wild is that? And as cool as this first issue is, it's genesis is even more interesting. After the debut story, Conway and Chaykin teamed for one more (#19, April 1973) and the strip went through a revolving door of creators. Marv Wolfman wrote #20 (June 1973), joined by new artist Herb (Incredible Hulk) Trimpe. 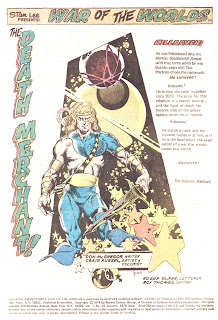 Don McGregor came aboard with AA #21 (August 1973), giving the strip the purpose, focus, and cast it needed to make WotW one of the greatest, best remembered series of the Groovy Age. He remained as writer for the remainder of the series (with the exception of the Bill Mantlo written/Herb Trimpe drawn issue #33, August 1975, and the Mantlo-penned/Keith Giffen penciled fill-in issue #38, July 1976). Rich (Deathlok) Buckler provided energetic and exciting pencils for issue #25 (April 1974), and Gene Colan and Dan Adkins did a beautiful job on issue #26 (June 1974). P. Craig Russell took over as permanent (except for the afore-mentioned issue #'s 33 and 38) penciler with issue #27 (August 1974). In Russell, McGregor found the perfect artist to give life and form to his pithy prose. So strong (and beautiful, and magnificent) were the McGregor/Russell-produced issues (ending with the book's cancellation with issue #39 in August 1976), that it is their run that is remembered and most-praised by fans of WotW.

But the story of the McGregor/Russell WotW collaboration is fodder for another post, Groove-ophiles. Keep your eyes peeled--ya never know when Ol' Groove'll spring it on ya! Pax!
Posted by The Groovy Agent at 12:02 AM