If You Blinked You Missed: Savage Combat Tales 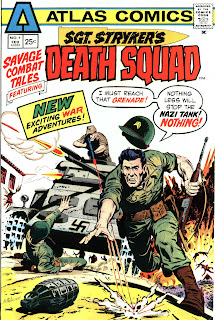 What's happening, Groove-ophiles? Today we're gonna head back into Atlas/Seaboard territory and delve into the daring doings that went on in Savage Combat Tales. In 1974/5, war comics were still good sellers. DC and Charlton were still pumping them out by the boatload, so naturally Atlas/Seaboard had to have a couple of their own. For SCT, editor Larry Lieber tapped Archie Goodwin as writer--one of the smartest moves Atlas/Seaboard had made. Archie had written the acclaimed Blazing Combat mags Warren had put out in the 60s, and was just finishing a successful tenure writing and editing some excellent war mags for DC (Star-Spangled War Stories and G.I. Combat). 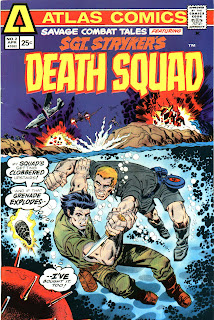 Savage Combat Tales was headlined by Sgt. Stryker's Death Squad, a pared down Dirty Dozen rip-off featuring a life-loving leader and his bloodthirsty outlaw unit (though his Death Squad is given a full pardon by the second issue) fighting the good fight in North Africa. The twist of having Ben Stryker, a man raised to cherish life by his doctor father, lead a squad of killers on missions of mayhem isn't a bad premise at all. Of course, Stryker has to go against his own beliefs from time to time, taking lives to save others (a la his obvious real-life inspiration, Sgt. Alvin York), while his Death Squad dispenses bullets and grenades with obvious relish. The strip is a bit different for Goodwin, featuring slam-bang action and loads of violence instead of the usual morality tales he wrote so wonderfully. Goodwin is ably assisted by artist Al McWilliams, who turns out some very slick, exciting art, his mix of realism and cartooniness making each issue feel like a movie. Dig how they got it all together in "Reborn In Battle!" from SCT #1 (November 1974). 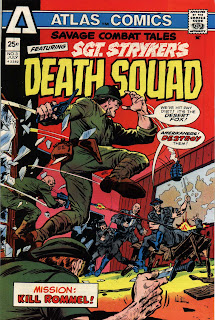 The back-ups in Savage Combat Tales were usually in the EC-inspired vein with regular soldiers in situations that end with ironic twists, but the second issue's (January 1975) back-up aspired to be a bit more. Drawn by the master, Alex Toth, Warhawk was a WW II aviation strip featuring the mysterious, masked Warhawk protecting the skies above Burma. Now, Ol' Groove thinks Warhawk is a definite highlight of the Atlas/Seaboard line. However, this is what Alex Toth, himself had to say about the art on the strip*...

"The Warhawk" script by Archie Goodwin hooked me, yes, but, when finished with my part of it all, I felt I'd not done my job as well as it deserved--dunnowhy, now--could be I was up to my ears at Hanna-Barbera--or--? So, moonlighting it--? Dunno! Just think I vamped it wrongly--working for color may've added to it, too--the order of my other "Atlas/Seaboard" story-sets and this one is beyond my recollection now--which one came first--etc.--but--here again, a masked P-40 pilot-hero--was a design problem--no capes, trick costume bits, just a leather jacketed "Flying Tiger"-type guy w/sidearms, boots, jodhurs, as I remember silk chute-scarf, helmet--and mask--and I failed it, somehow! Could've/should've/been better! Sorry, Archie--all!

I don't have the skill/talent/know how Mr. Toth possessed, so I still dig this strip. I think you will, too!