If You Blinked You Missed: Comix International 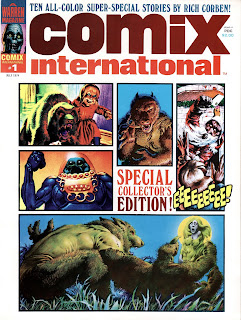 In 1974, Jim Warren went to war (again) with Stan Lee over who would take up the most space on the magazine racks. Lee (and of course, Marvel, though they left that name off the mag, believe it or not) had teamed with Denis Kitchen* to produce The Comix Book to cash in on the Underground Comix craze that was sweeping the country. Chafing at yet another attempt by Marvel to squeeze him out of his own turf, Warren answered with Comix International, showcasing his only real tie to Underground Comix, the amazing artist who had broken from the UG ranks and into the mainstream at Warren, Richard Corben. Reprinting various Corben-drawn (and colored, natch) stories from Creepy and Eerie, the magazine was square bound, full-color, on white paper, sporting a heavy cover stock--and it was expensive ($2-$2.50 per issue when regular comics were twenty-five to thirty cents). As usual, the big boys were getting into a fad just as it was fading, so Warren quickly gave up the pretense of CI being an overground Underground and simply reprinted the best of his color inserts from Creepy, Eerie, Vampirella, and even the Spirit for the rest of the mag's run. Comics International lasted only five issues, published more or less annually from 1974 through 1977 (two issues were published in 1975). 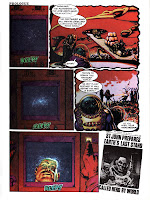 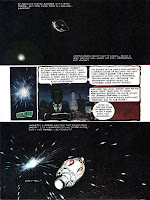 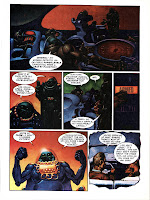 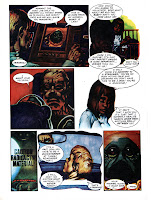 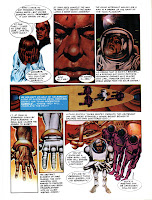 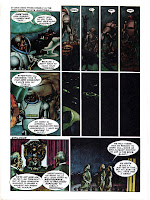 * UPDATE: Click the "comments" link below for more interesting info on the Warren/Marvel Comix International/Book feud by the man who was there--none other than Denis Kitchen, himself! (Ol' Groove is so psyched that Denis stopped by...!)
Posted by The Groovy Agent at 12:02 AM