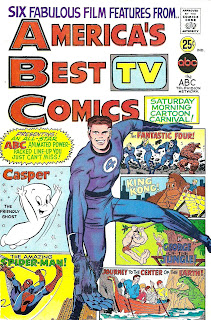 Li'l Groove loved cartoons. Loved 'em to death. When I was just a little shaver, we didn't just get cartoons on Saturday mornings, but on Sunday mornings, as well. T'was a good time to be a kid! Now, I'd dabbled in comics since I can remember, due in no small part to ABC TV's Batman, but in the late summer of 1967, the cartoon and comicbook worlds collided for me in a way that just blew my pre-school mind, baby! My parents, bless 'em, I don't remember how they did it, but they got wind of a mail-in offer from Marvel Comics and ABC TV called, you guessed it, America's Best TV Comics, sent in a quarter and waited. I can vaguely remember (I was barely four years old after all) the mail coming in and Mom handing me a package, smiling, telling me to open it. Need I say I flipped when I got that wrapper open? The Fantastic Four. Spider-Man. Casper, the Friendly Ghost. George of the Jungle. King Kong. Journey to the Center of the Earth. 68 pages of heaven! I held Saturday morning in my hands! I don't remember much after that, I must have passed out from the ecstacy of it all...

Yep, the Spidey, FF, and Casper stories are reprints (from Amazing Spider-Man #42, Fantastic Four #19, and an issue of Casper I can't pin down). But they were all new to Li'l Groove!

The reasons why I love the Internet: eBay, downloads, and blogging (okay, there's SingSnap, too, but I ain't goin' there here...). Memories can be reclaimed and made tangible once more! As I dug back into my long-lost friend (America's Best TV Comics--you sure have a short memory today!), I started noticing the ads for other ABC shows. Some I remember either well or at least vaguely, others are so unfamiliar as to seem like they came from an alternate world. How many of these shows do you remember, Groove-ophile?

Somebody please fill me in on the following: Cowboy In Africa (I really dig Chuck Connors, but I absolutely can't remember that show), The Second Hundred Years, and Custer (who starred in that one?). I'm counting on ya! Don't let Ol' Groove down!
Posted by The Groovy Agent at 12:02 AM