Groove's Faves: "Murder in the Night!" by Starlin and Russell 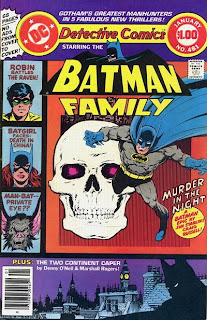 What it is, Groove-ophiles! Since we're kicking off a new week and a new month, we might as well kick it off in style! And what style! Today we're truckin' back to September 1978, to the first Dollar Comic issue of the new, combined Detective Comics/Batman Family #481. The whole mag (all 68-ad-less pages of it) was dy-no-mite, but for today we're gonna focus on that issue's final feature, "Murder in the Night" featuring none other than The Batman. There are so many things that make this story cool. It's moody. It's downright spooky. It gives a glimpse into Bruce Wayne's boyhood and Thomas Wayne's past. It features an over-the-top, honest-to-Irving mad scientist. It's dark and kinda gory. It shows Batman actually doing detective work. And it ends with a cliff-hanger that features a giant albino ape with the mind of a man. Yeah, that doesn't sound like your run-of-the-mill Groovy Age Batman feature, does it? That's 'cause this masterpiece of macabre (originally intended as a two-parter for Batman Family issues 21-22) was written and laid by editor Al Milgrom's pal and our fave cozmik creator Jim Starlin...finished and inked by a certain comicbook virtuoso by the handle of P. Craig Russell. Yeah. Starlin and Russell at DC doing Batman in 1978. The mind boggles, huh? If you're boggling now, wait'll you get a load of this! 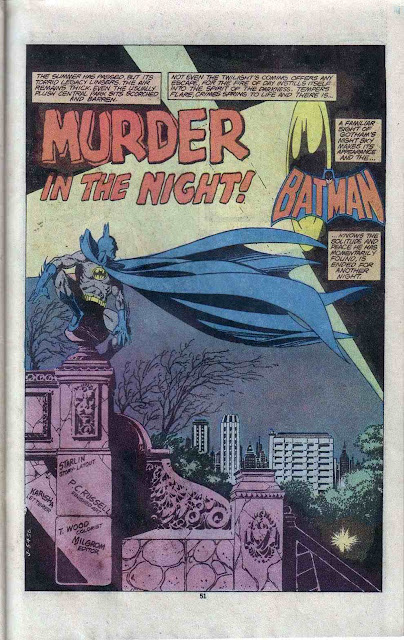 Will The Batman survive his encounter with Xavier Simon's mind-controlled, 400 pound pet? We'll find out tomorrow, Groove-ophiles! Same Bat-time! Same Bat-blog!
Posted by The Groovy Agent at 12:02 AM