Groove's Faves: "Nothing but a Man" by Maggin and Von Eeden

Greetings, Groove-ophiles! Today's post digs up yet another far-out tale from the Files of the Forgotten, the scintillating sequel to Elliot S! Maggin's legendary "What Can One Man Do?" from Green Lantern/Green Arrow #87 (September 1971). That tale, based on a term paper Maggin had written his junior year of college, catapulted the young writer into super-stardom, landing him a permanent place in editor Julie Schwartz's stable where he'd become a semi-regular on Superman, Action, and other DC comics. Lots of folks remember that story because of its stark-realism, superbly illustrated by Neal Adams and Dick Giordano. I know it really grabbed Young Groove, Green Arrow's experience in a race-riot and struggle with whether or not to serve as Star City's mayor forced me to think about things like tolerance, justice, and public service. It's been reprinted many times, most recently in one of DC's mammoth Showcase editions. 'Tis the definition of a classic.

Few, sadly, remember Maggin's stunning sequel, "Nothing but a Man" from World's Finest #255 (November 1978), in which G.A. (as Oliver Queen, natch) finally does run for mayor. Again, the story is superbly written, fraught with realism and pathos, thought-provoking, and yes, painful in its frankness. While the art by a teen-aged Trevor Von Eeden packed a punch, much of the realism was drained from it by Vinnie Colletta's feathery, cartoony inks. If a 20-something Von Eeden had drawn this baby, t'would have definitely made fandom stand up and take notice. Still, "Nothing but a Man" deserves much more attention that it will ever get. And here's why... 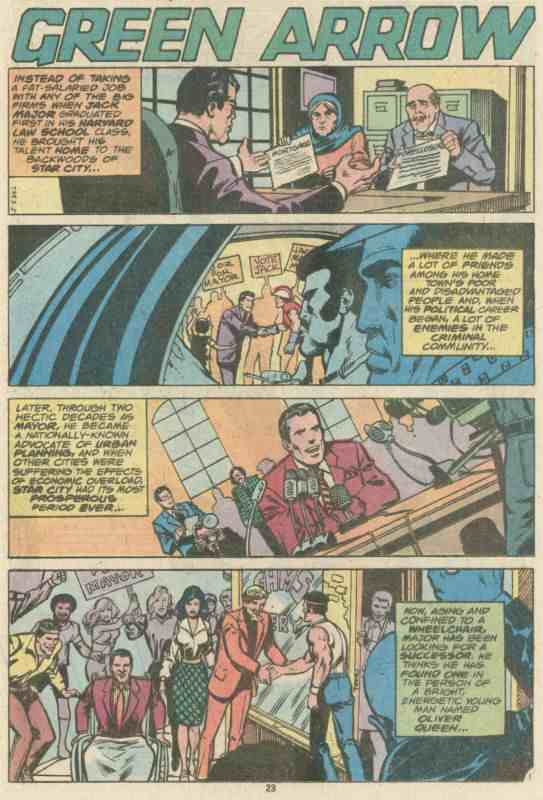 Random Reads: "Tears for the World Called Heaven" by Moench and Sutton

Hey, hey, hey, Groove-ophiles! Peter Jason Quill, aka Star-Lord was one of the most far-out characters to come out of the Groovy Age. Ol' Groove has always been a sucker for sci-fi superheroes and Star-Lord was one of the best. His powers (that element-firing pistol is so cool!) and his space-ship/companion "Ship" (another of the coolest characters of the Groovy Age--gonna have to devote a post to her--er--it one'a these days) made him quite unique. I also dug the way he wasn't part of the Marvel Universe proper, allowing him to explore the universe without bumping into Kree or Skrull or any of the other alien races we were familiar with. But my most favorite thing is how writers Chris Claremont and Doug Moench came close (as close as mainstream, super-hero oriented comics would allow, that is) to giving us actual "hard sci-fi" tales with Star-Lord's adventures. Our focus for today, "Tears for the World Called Heaven" (from Marvel Spotlight Vol. 2, No. 7, April 1980) is such a story. Written by Moench with expressive, otherworldly art by the great Tom Sutton, "Tears for the World Called Heaven" laid some pretty heavy ideas, such as integrity, consequences, and sacrifice, on those of us who were more used to a lot of punching, kicking, and blasting. Once more, Doug Moench demonstrates how comics can be adult in the most positive sense of the word. 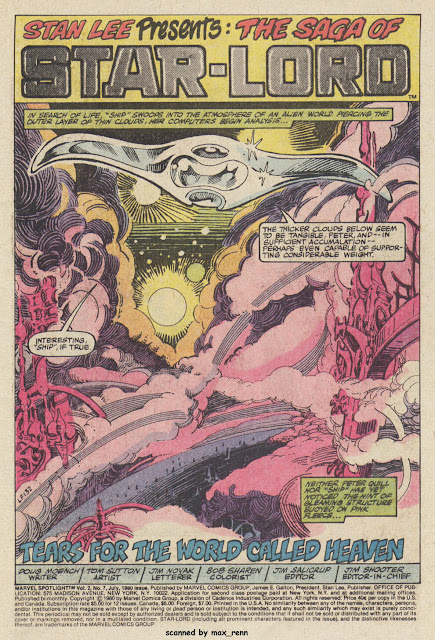 (Thanks to max_renn for the sensational scans!)
Posted by The Groovy Agent at 12:02 AM 1 comment:

Ol' Groove's love for Mike Grell's Warlord is no secret here in Groove City. Grell, whether we realized it or not at the time, was quietly creating a revolution with this mag, setting the stage for the return of the super-star writer/artist in the 1980s. Not only was he in total creative control (like Jim Starlin on Warlock--wow--two "War's" against mediocrity!), but he was changing how comicbook stories were being told. He cut back on the flowery prose captions and extraneous dialogue allowing the art to carry much of the story. He experimented with the format, giving us breathtaking double-page splashes and full page panels that would make Jack Kirby proud. (Unlike many later artists, Grell knew how to use these for effect, to move the story along, rather than tossing in random pin-ups on a whim.) The tautness of the script and the experimentation with panel layouts had to have hit a young Frank Miller where he lived, 'cause he took the same innovations and applied them to his Daredevil work. A lot of fans have forgotten what a trailblazer Grell was, well, baby, see if these splashes from Warlord issues 1-7 (October 1976-March 1977) don't jog your memory and excite your eyeballs! 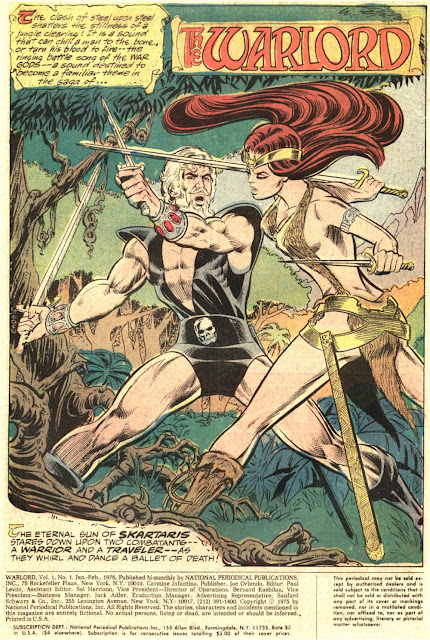 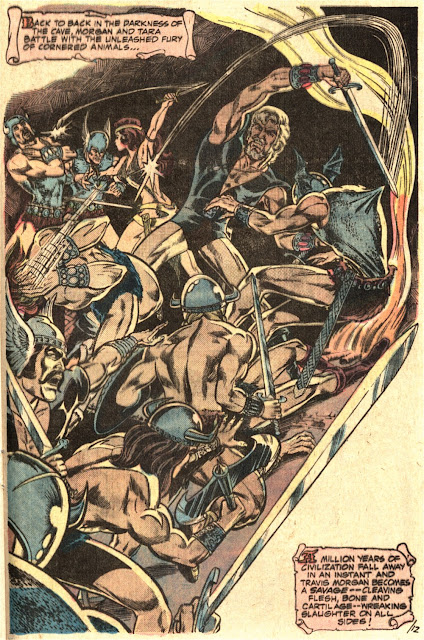 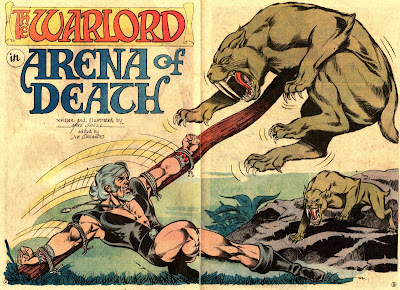 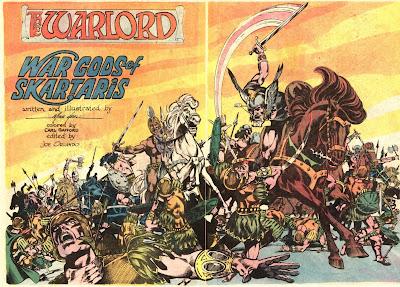 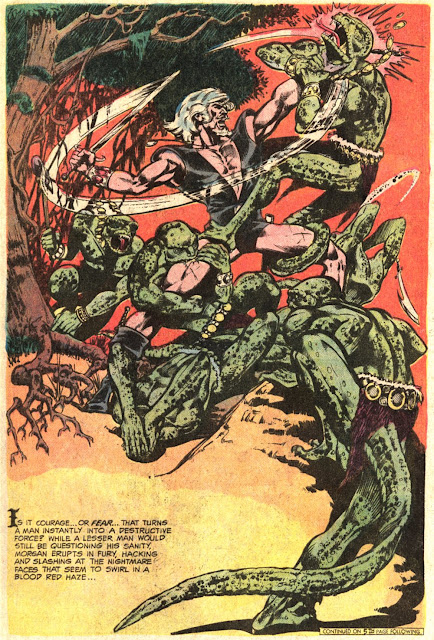 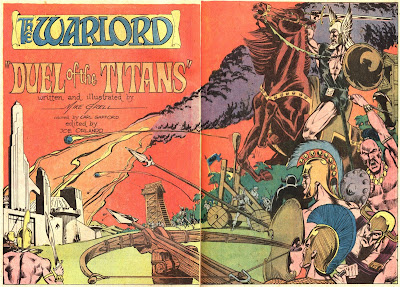 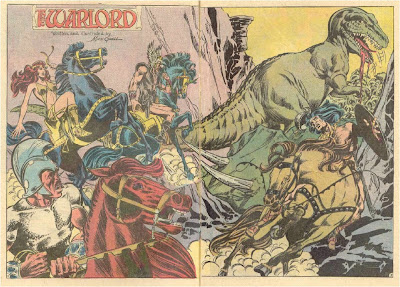 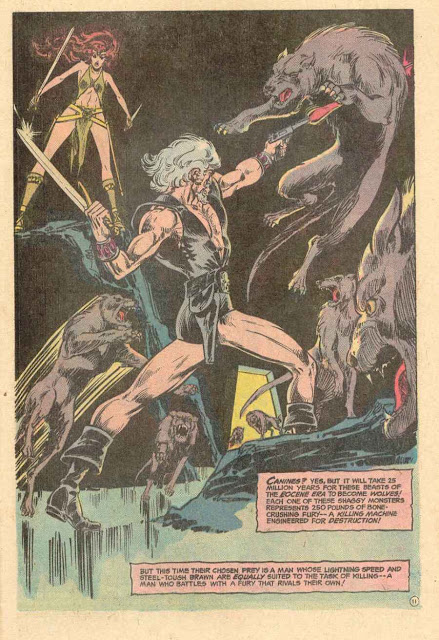 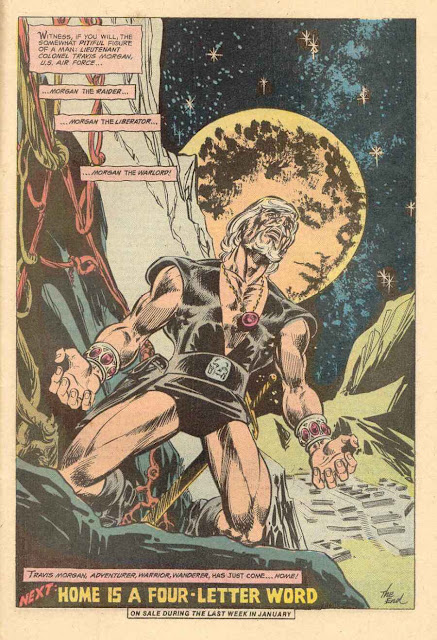 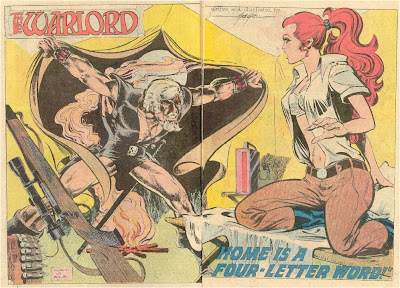 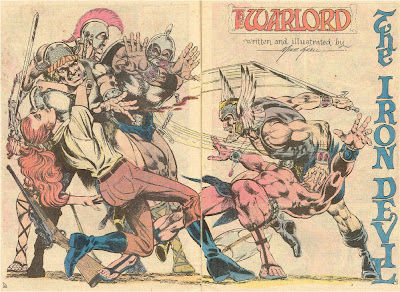 Amazed by Aparo: "Death's Bridegroom!" by Browne and Aparo

What it is, Groove-ophiles! DC didn't have enough mystery/horror mags in the Summer of '71, so in July they released the first issue of Ghosts. The hook for Ghosts was in the tagline that revealed that the stories in this mag were "True tales of the weird and supernatural!" The aim of each story was to, not only make you quake and shiver, but believe in ghosts. Did it work? Well, no, not for me, but I did really dig many of the trembling tales presented in that mag. One of the best appeared in the very first ish. It was written by "Geoff Browne" (actually Superman specialist Leo Dorfman) and drawn in an especially moody and macabre fashion by the great Jim Aparo. His use of shadows, his ability to make his characters "act" (just check out the facial expressions and body language), and his uncanny, Hitchcock-like knack for knowing what to show and what not to show made Jim one of the best mystery artists ever. No wonder many consider him to be the definitive artist on men of mystery like Batman and Phantom Stranger! 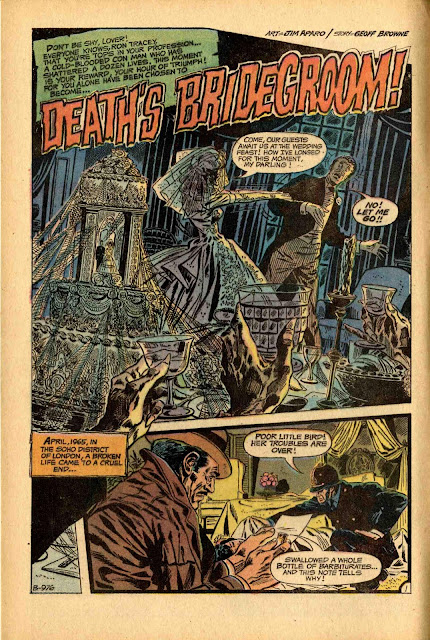