While Young Groove always dug the Black Goliath character, the short-lived comicbook series never really lived up to its promise. Until the final issue. After four issues of run-of-the-mill super-heroes punching out third-rate super-villains, "Survival!" was a breath of fresh air. I dunno if it was the amazing Keith Pollard art, or regular scripter Chris Claremont (who wrote issues 2-on) finally cutting loose with a full-out sci-fi story, but after four mediocre issues, Black Goliath #5 (August 1976) just blew me away. While the plot isn't earth-shattering (or even all that original), it is a touching tale of friendship, heroism, and sacrifice. But. It. Was. The. Last. Issue. Wonder what Claremont and Pollard would have dreamed up for issue #6 had the series continued? Ah, well. We'll always have Kirgar.

Sports Sunday: The Justice League and Friends (and Enemies) in "The Great Super-Star Game" 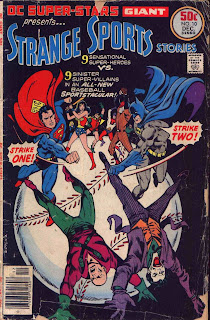 One of the things Ol' Groove loves so much about the Groovy Age of comics is the free-wheeling experimentation. DC was always considered the "safe" or "square" company, but truth to tell, they did quite a bit of experimentation at the House That Superman Built. One of their greatest experimental titles was the not-very-originally titled DC Super-Stars. Each issue would feature a different hero, villain, or theme. Sometimes an issue might be nothing but reprints. Sometimes all-new material. Other times it might be a mix of new and old. You never knew what the folks at DC were gonna toss at us from issue to issue, but we knew it would at least be interesting. One of the wildest issues was DC Super-Stars #10 (September 1976) with its Strange Sports Stories theme (and Ernie Chua--aka Chan--cover). This time, instead of an anthology of sports themed sci fi and fantasy stories, editor Julie Schwartz assigned writer Bob Rozakis and artists Dick Dillin and Frank McLaughlin (the regular JLA art team) to create a story about a super-All-Star Game. The story is quite whimsical and more than a little silly, but it's more fun than any dozen "mega-events", can you dig it? Like, who wouldn't wanna read about a super-powered baseball game that pit the team of Superman, Batman, Wonder Woman, Robin, Kid Flash, Plastic Man, Green Arrow, Black Canary, and the (original) Huntress, against the team of Lex Luthor, the Joker, Chronos, Weather Wizard, Dr. Polaris, Matter Master, Felix Faust, Tattooed Man, and Sportsmaster--with Uncle Sam and Amazo as umpires? Just for giggles, I'm tossing in the the play-by-play feature from the letters page. Batter up!

Random Reads: "Heart of a Vampire"

While "Iron" Mike Grell was making his reputation as DC's hottest sci-fi artist on Superboy and the Legion of Super-Heroes and Green Lantern/Green Arrow, he slipped in this far-out fable featuring his facility for fear-fraught figments. I can't for the life of me understand why Grell wasn't tapped to be The Batman's regular penciler, 'cause this little-seen classic sure goes a long way in proving that the man had the chops to capture the mood and mystery integral to the adventure of the Dark Knight. At least that's Ol' Groove's opinion. (Oh, and far be it from me to slight the writing skills of Elliot S! Maggin--he's grrrreat! But you knew that, right?) From Detective Comics #455 (October 1976), here's "Heart of a Vampire"!