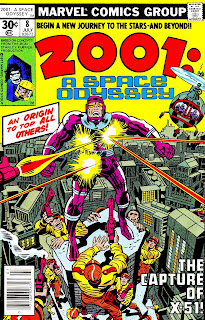 Greetings, Groove-ophiles! Today is Jack (King) Kirby's birthday, and Ol' Groove can't think of a better way to celebrate the genius of the King than by sharing one of his wildest creations wit'cha, none other than Aaron Stack, X-51, Mister Machine--Machine Man! As you may know, back in 1976, Marvel Comics acquired the comicbook rights to Arthur C. Clarke and Stanley Kubrick's 2001: A Space Odyssey and handed the creative chores to our man Jack. After adapting the film into comicbook form in one of those tabloid-sized comics I love so much, Jack was rewarded with a regular 2001 comicbook series. How do you turn a psychedelic romp through the cosmos into a monthly comicbook? Well, Jack Kirby just kept tossing even more science fiction romps at us issue after issue. The series really didn't catch on, though, until issue #8 (April 1977), when Jolly Jack introduced an android designated "X-51". 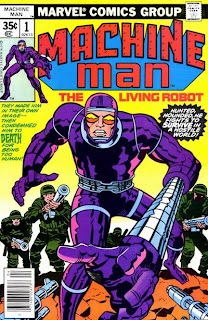 In issues 8-10, Jack explored the "reality" of a manufactured man. He was created to be a weapon, he has a mind of his own--does he have a soul? Does he have rights? Is he simply a walking, talking equivalent of a tank? Did Jack Kirby dig manga? (Machine Man's origins are like a really cool mish-mash of 8th Man and Astro Boy, after all.) Whatever the answers to those questions may be, fans dug the concept, and the high muckety-mucks at Marvel saw a way to keep Jack's fans (and perhaps, the King, himself) happy while getting out from under the costly licensing deal they'd gotten themselves into with the owners of the 2001 rights. They'd ditch 2001 (and any references to it) and give Mister Machine his own mag. Sheer genius, right? 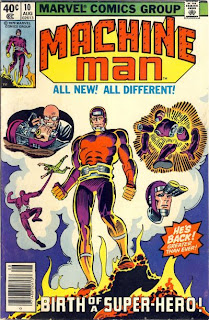 Wrong. Ideal was planning to revive it's Mister Machine toy trademark, plus there was a very popular drip coffee maker on the market called Mister Coffee. Marvel would have to come up with another name. In the tradition of hasty comicbook name changes, Marvel settled on the functional-yet-alliterative Machine Man. The comic made its debut in January, 1978, and lasted 9 issues before Kirby left Marvel. Eight months later, Machine Man returned to the spinner racks with writer Marv Wolfman and artist Steve Ditko as the creative team. This version lasted another ten issues before Machine Man was relegated to comicbook limbo. Oh, X-51 has popped up here and there ever since in mini-series, guest shots, and even a stint in the Avengers. Ya gotta keep those "TM's" intact!
Posted by The Groovy Agent at 12:02 AM