Greetings, Groove-ophiles! Let's keep our first anniversary party going with a groovy guided tour of the famously fabulous FOOM Magazine #1 (Spring 1973)! If you need a little FOOM background before we dive in, you can check out my previous FOOM post. I'll wait.
Back so soon? Okey-dokey! First up, here's Jim Steranko's cover featuring Stan "the Man" Lee and his initial greeting to the legion of FOOMdom. Right off the bat, Steranko's pop art and design skills raised the fan-mag bar to new heights!

Next we get Steranko's editorial in which he shares the lowdown on how FOOM came to be. Note the little FOOM sayings, dubbed "Fabulous Foomies", scattered in the margins (sometimes most any white space) of these pages. It wouldn't be long before Marvel would start using fan-created "Foomies" to decorate the pages of FOOM.

One of Young Groove's favorite FOOM features was the Bullpen Bios section. For the first issue, the spotlight fell on Stan, John Buscema, Roy Thomas, Joe Sinnott, and Gerry Conway. Dig those crazy photos, baby! The clothes! The hair! Ah, the 1970s!

Steranko and his armadillos created some truly awesome games to help fill FOOM's pages. The first one being this frankly fabulous "Hulk Stumped!" crossword puzzle. Don't get crayon marks on your monitor, Groove-ophiles!

The second best part of FOOM Magazine, for moi, was the hero histories we'd be treated to in each issue. It was only natural that FOOM #1 would celebrate Marvel's premiere super-team, the Fantastic Four! Young Groove totally geeked-out when he planted his peepers on that FF checklist. Sadly, the checklist feature ended when Steranko left (ish #4).

Lookit! Another puzzle page! This time it's a wondrous word-search hosted by Kraven the Hunter.

The Marvel Merchandise Machine started rolling along with page 15's advertisement of the "first rockomic" The Amazing Spider-Man. Dig that John Romita art! I wish I'd have scraped together the three bucks to order this Ron (The Archies) Dante extravaganza!

Another innovative activity of the Steranko era of FOOM: the center spread board game! Go ahead, give Nick Fury in "Moving Target" a try!

Remember when I said the hero histories were my second favorite feature? Well, here's my all-out fave: the "Department of InFOOMation" (originally called "Far-out Fanfare and InFOOMation"). Since FOOM was a quarterly, you got a glimpse of what was to come in Marvel comics up to three months in advance (hmm, why does that lead-time sound so familiar?). Said glimpse included a plethora of cataclysmic covers. Enjoy!

FOOM Magazine was always filled to the brim with awesome art, and as you can see the premiere ish is no exception. Dig this incredible Jack Kirby cover art for Fantastic Four #73!

Steranko concocted yet another word puzzle, this one featuring the FF's fiercest foe, Dr. Doom!

"Recommended Reading" opened the world of fanzines up to young fans like yours truly. Who knew there was a whole big world of fandom out there back then? FOOMers did, baby!

Down the home stretch we got a "Master of Disguise" activity starring Nick Fury; "Fantastic Fear" (from the 1967 Marvel Comics parodies series produced by Topps) by Roy Thomas, Len Brown, Gil Kane, and Wally Wood; a Marvel t-shirts ad ($2.50 for a Marvel tee--hoo-ha!); a page with answers to the issue's puzzles along with ordering info; and a snazzy Steranko Spidey piece (originally produced a few years earlier for Marvelmania).

There ya have it! The secrets of FOOM Magazine #1 held in deepest confidence for over 35 years--now revealed unto all true Groove-ophiles! Aren't you glad you stopped by? Pax!
Posted by The Groovy Agent at 12:02 AM 4 comments:

"Where Did Groovy Age Comicbooks Come From, Groove?" 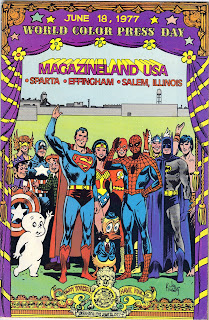 Today's comicbooks are printed in lots of different places in lots of different formats. Back during the Groovy Age, most of the major publishers--namely Marvel, DC, Archie, and Harvey--used good old fashioned newsprint and the services of World Color Press. (We'll talk about Charlton and the others when you get older...) World Color Press was so important to the publishing industry that June 18, 1977, was declared "World Color Press Day". Joe Kubert and the students at his aptly named Joe Kubert School of Cartoon and Graphic Art were tapped to create a (-n extremely rare) comicbook tribute called Magazineland, USA to help celebrate the occasion.

"Okay, so World Color Press is where comics came from, but how were they made, Groove?" My, but you're a precocious li'l Groove-ophile today, aren't you? Okay, if you think you're ready for it, here's how World Color Press made your favorite Marvel, DC, Archie, and Harvey comics way back in the Groovy Age...

Pretty far-out, huh? But hey, Ol' Groove doesn't do things half-way, ya know! Here, via YouTube and thanks to DynaPubs, is actual film footage taken on that fateful day at World Color's main plant in Sparta, Ill! Not only can you see first-hand how comics were made, but there's even a little "mini-interview" with the late Phil Seuling, one of the founding fathers of the direct-sales market! Man, do I dig up the stuff for ya or what? Watch, listen, learn, and enjoy, baby!