P. Craig Russell is one of those comicbook artists who transcends the medium that spawned him. He started out as one of Dan Adkins' many proteges, with an early style that showed little of the originality and classicism that would quickly follow. Like Barry (Windsor) Smith before him, Russell's talents blossomed and grew so quickly, it was literally breathtaking. Take a look at his cover to The Buyer's Guide #14 (April 1972). It's a nice piece, you can see bits and pieces of Jack Kirby, Jim Steranko, and Barry Smith trying to merge into a cohesive style.

Nice, solid storytelling. Fine grasp of anatomy. A pleasant, if functional, style. After reading this story, one would imaging Russell going on to become a regular Marvel contributor, mastering the Marvel "house style", handling a couple of regular features, and doing lots of fill-ins. In fact, it only took a couple months before Russell was awarded his own regular series, penciling (of all things!) Ant-Man in Marvel Feature (issues 7-10, October 1972-April 1973). It was there that his art began to change a little, his figures, especially, started to become a bit more stylized, a bit more dynamic. Check out a few samples...

Over the next couple of years, Russell would, indeed, pencil many fill-in issues for Marvel on a variety of strips ranging from Dr. Strange to Iron Man to Master of Kung Fu to Morbius (in Fear). During that time, Russell's art didn't stay static. His unique style was beginning to emerge, and I don't think Marvel was sure what to do with it.

The perfect answer came when Russell took over the penciling of the War of the Worlds/Killraven feature in Amazing Adventures with issue #27--two years to the month after his Marvel debut! On WotW/Killraven, Russell's art grew by leaps and bounds. His style started as a big, powerful Marvel house-style and morphed into an intricately detailed, classical, decorative style that just blew fandom away. WotW/Killraven writer Don McGregor has to be given credit for writing stories that allowed Russell to stretch his creative muscles so that he could develop the lyrical, intensely emotional style we've come to know and love.

After Amazing Adventures ended (AA #39, August 1976--exactly two years after his debut--hmmm...), Russell began working for a variety of publishers, especially, at first, at least, Star*Reach, the "ground level" (not underground but not Comics Code approved) publishing venture started by Mike Friedrich. It was there that Russell began expanding, not only his own artistic skill, but the comicbook medium by adapting the operatic works of Richard Wagner into comicbook form. Throughout the 1980s and right up to the present day, Russell keeps breaking down the barriers between comicbooks and true art, adapting not operas but classical music like Mozart's The Magic Flute, literary works like Rudyard Kipling's The Jungle Book, Edgar Allen Poe's Fall of the House of Usher, he fairy tales of Oscar Wilde, and much more--while never turning his back on great fantasy like Michael Moorcock's Elric or Robert E. Howard's Conan. Still going, better than ever, Russell's work can be found most recently in Vertigo's Sandman: The Dream Hunters mini-series. 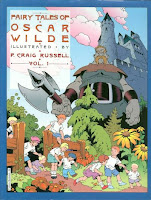