Greetings, Groove-ophiles! Here it is, our One Thousandth post here on DotGK! Sound the trumps! Fire the cannons! Let the doves fly! Bring me some ibuprofen--my carpal tunnel's coming back! 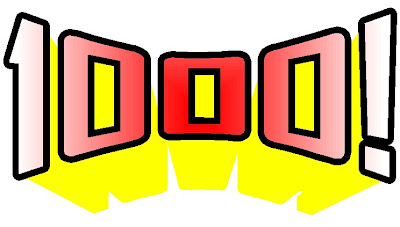 Seriously, Ol' Groove is humbled have so many of you fine folks out there in the intranet making DotGK your stopping-off point on a daily basis. The fact that DotGk has well over 1,500 subscribers and hundreds of "drop-in" readers blows Ol' Groove's mind--and I appreciate you one and all. I especially want to thank the dozens of you who've been true-blue Groove-ophiles from virtually the very start of of this humble blog waaaaaaay back in July, 2008! Fellow bloggers who took me in and made me part of the "family", like Joe Bloke at Grantbridge Street, BookSteve, Pat Curley from Silver Age Comics, Andrew Wahl of Comics Bronze Age fame, Mykal Banta of the many blogs, and so many more have helped me in a myriad of ways, from tips, to corrections, to flat out friendship. I also have to thank all of the pros who've contributed to make this blog so special. Not just the ones whose work I share with y'all day in and day out, but the ones who actually stop by to read and/or comment on goings on in Groove City. I could name-drop all day (Denis Kitchen, Roy Thomas, Mark Evanier, Paul Kupperberg, Steve Skeates, P. Craig Russell, Nick Cuti, Joe Staton, Walter Simonson, Scott Edelman, Kevin Nowlan--oh, I'd better quit before I leave someone out) and go all gushy over how fanboyish me's heart goes all a-flutter when one of my heroes drops a comment or e-mail. I certainly need to name and thank the Groovy Age pros like Michael Netzer and Rich Buckler who believe in DotGK so much that they actually took time to write posts for us. And how dull would it get around here, speaking of Guest Bloggers, if folks like Barry Pearl, Sharon K., Mike Mikulovsky, and Jazzy Jonathan "A" Gilbert hadn't stopped by to share their powerful points of view?

Thanks to all of you, named or not. Your kindness, generosity, and support are appreciated more than you'll ever know. Keep on truckin', Groove-ophiles! Keep on truckin'!

Okay, okay, this ain't an awards show, so where's the comix? Well, to celebrate this milestone occasion, it has to be something special. Something rare. Something HUGE. What could be more rare and huge than the legendary, almost mythical Wham-O Giant Comics?

I remember getting this one-of-a-kind comicbook rarity from a big display in the toy section of a Rink's department store in the Cincinnati area. I don't know for sure what year it was and I sure don't see how I talked my folks into shelling out 98 cents for a comicbook--unless the very sight of that awe-inspiring 14" x 21" tabloid monolith grabbed their imaginations the way it grabbed mine. Of course, it could have been a few years after the mag's 1967 debut and we got it at a discount. Either way, Li'l Groove knew how he was gonna spend the rest of that fateful Saturday (or was it a Sunday?)!

Wham-O Giant Comics was produced by--duh!--Wham-O, the legendary toy company that gave us such magical childhood memories with their Frisbees, Hula-Hoops, Slip-and-Slides, and Super Balls. Evidently, during the 1966/67 Batmania craze (fueled by--you guessed it!--ABC's Batman TV show), everyone wanted to produce comics and super-heroes--including Wham-O. I've never been able to find the name of the publisher and/or editor behind this unique assemblage o' comics, but man, did whoever it was believe in packing 52 pages with piles of panels! Over 1500, according to the cover. Count 'em if you want--Ol' Groove'll take their word for it!

Super-heroes, sci-fi, humor, adventure, mystery, fantasy, games, puzzles, and (natch) ads for more Wham-O toys (and even a subscription to Wham-O Giant Comics, which was intended to be a quarterly mag) filled every inch of every humongous page. In their zeal to get those 1500 panels into print, and despite the size of the actual pages, you could still get eyestrain trying to read the furshluginner thing! Still, knowing there were strips by the likes of Wally Wood (don't overlook Goody Bumpkin!), Lou Fine, Ernie Colon, John Stanley, and Warren Tufts made it worth the risk, baby! Have at it and have fun! 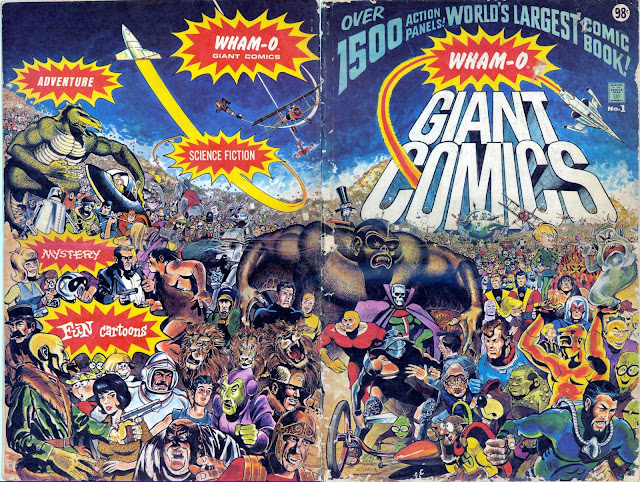 And a special shout-out and "Thanks, man!" to jodyanimator for the sweet, sweet scans! Man, did you save Ol' Groove some sweat and eyestrain!
Posted by The Groovy Agent at 12:02 AM