Science Fiction Theater: "Who Goes There?" by Campbell, Drake, and Abel 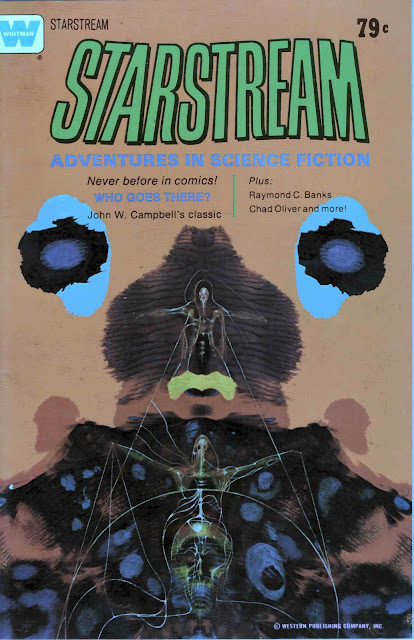 Greetings, Groove-ophiles! Anyone remember when Western Publishing published four issues of an oddball comic called Starstream under their Whitman umbrella? The year was 1976, and sci-fi was getting hot again thanks to the network TV debut of 2001: A Space Odyssey, new flicks like Logan's Run and Star Wars, and TV shows like Space: 1999. Someone thought the time was right to pick up where Marvel had left off with Worlds Unknown and Unknown Worlds of Science Fiction and produce comicbook adaptations of classic sci-fi prose tales.

Starstream was a strange duck as it was a thick, square-bound anthology with cardstock covers. It sold for seventy-nine cents and could be found in most department stores racked with coloring books back in the toy department. (At least that's where you found 'em in Young Groove's neck of the woods.) It didn't have the "zing" of Marvel's previous offerings (you knew it was the same guys who did mags like Twilight Zone, Boris Karloff, and Ripley's Believe It or Not behind it), but boy, editor Roger Elwood had good taste in material. The first issue alone featured strips adapting Joan Hunter Holly, Raymond Banks, Howard Goldsmith, and the great John W. Campbell--the focus of today's post.

Campbell, often credited as the man behind the Golden Age of Science Fiction thanks to his legendary and lengthy run as editor of Astounding (which later morphed into Analog--and is still going strong). He also wrote the classic "Who Goes There?" in the late 1930s, considered one of the all-time greatest sci-fi stories. You probably know the story better as The Thing, since that was what the cult-fave movie adaptations were called. Well, here's that ground-breaking sci-fi shocker in its four-color debut from Starstream #1. Adapted by veterans Arnold Drake and Jack Abel..."Who Goes There?" 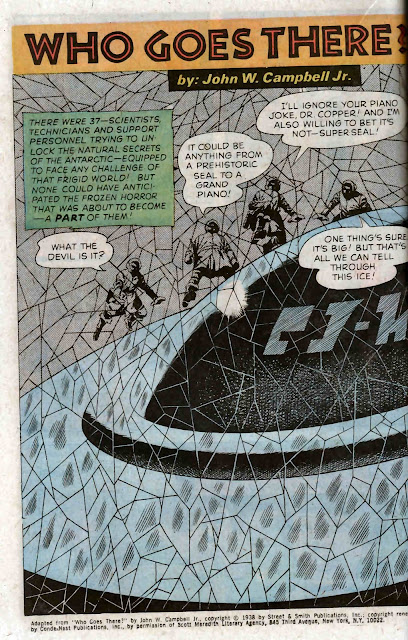