Black and White Wednesday: "The Fury of the Femizons" 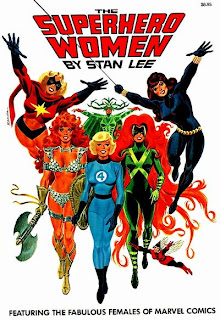 Ah, yes, Stan Lee and John Romita's Femizons. Nope, they didn't appear in a comic that came out in December (they originally appeared in the legendary Savage Tales #1 in the spring of 1971). There's definitely no Christmas theme to the story (except love and sacrifice...hmmm...). Nope, the reason Ol' Groove is layin' these barbaric beauties on ya is to create sort of a tribute to those great Christmases when Young Groove would get one of Stan Lee's "Origins" books stuffed in his stocking. Christmas 1975, it was Origins of Marvel Comics and Son of Origins of Marvel Comics. Christmas 1976 it was Bring On the Bad Guys. The last one, today's focus, was The Superhero Women, which I got for Christmas 1977. Loved, loved, loved those books. They were my gateway to the Marvel Age of Comics, Stan Lee style (Stan was easing back when yours truly got heavily into comics in 1971). I'll cover those titanic tomes before the month is out, never you fear, Groove-ophile!
Anyway, convoluted reasoning aside, I've just been looking for an excuse to unleash this little gem upon ya's. It's Stan at his "relevant" best, mixing sci-fi with a heavy message. Jazzy John Romita really cuts loose on this strip, as well. His costume designs, as well as his mixing medias like wash and charcoal, represent the most daring and original work he's ever produced, imho.

Here's how the strip came about, according to Stan from The Superhero Women, pages 195-196:

"The Femizons first appeared in Savage Tales #1, in the May '71 issue. I might add that that's when they last appeared, also; since we never did a follow-up story. You see, John (Ring-a-Ding) Romita and I were really bustin' to do a story for the first issue of an entirely new type of publication for us. For the first time, were were planning to do a comic book mag for somewhat older readers. Not an underground publication--not a so-called "adult" magazine--but rather, a selection of stories, done in black-and-white, slanted for the more mature science-fiction and adventure reader.

"Jazzy Johnny and I knew neither of us would have the time to do a sequel story after we finished the first one, but at least we'd have gotten this particular yarn out of our systems. We had been planning to do a strip about a band of warrior women for years; a strip that would take place in the future, when--owing to the ration of man/woman deaths, and the fact that the female population is increasing at a disproportionate rate of growth--women would be the dominant sex, and men would be cast in the subjective role that females had occupied for so many centuries."

It wasn't long, however, until Roy Thomas and Gerry Conway found a way to tie the Femizons into the Marvel Universe with the creation of Thundra in the Fantastic Four #129. But that's another story, man. Let's get to the Femizons!