If You Blinked You Missed...Gerry Conway and Mike Vosburg's Starman 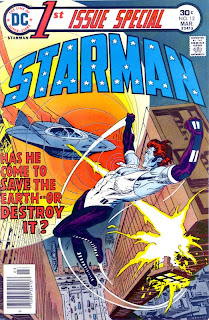 Greetings, Groove-ophiles! Today's trippy trip through the tomes of time is one that has always made me wonder, "Wha hoppen?" As I've mentioned before, from January, 1975-January, 1976, DC Comics published a try-out book (in the tradition of their much-loved Showcase title of the Silver Age) called First Issue Special. Of the thirteen concepts presented in FIS, only two, Warlord and a revival of the New Gods, ever made it to their own title. Many (the Green Team, Dingbats of Danger Street, and the Outsiders) didn't have a chance. They were kinda silly and definitely out of touch with what fans of the Groovy Age dug. Others, though, were really cool. One of the cool ones, the one that probably had the most commercial potential at the time, was Gerry Conway and Mike Vosburg's new Starman, who made his debut in FIS #12 (December, 1975).

As I said, the failure of Starman to catch on really puzzled Young Groove. First of all, Starman was a grand and much revered name among DC fans. Second, sci-fi superheroes like Marvel's Captain Marvel, Warlock, and Guardians of the Galaxy (in the original Marvel Presents) seemed to be doing pretty good business. Finally, the creators involved were solid talents and seemed to have a very cool story to tell.

Ah, well, thems the breaks. I know James Robinson tied this Starman to all the other Starmen in his legendary run on the 90s version of Starman (tongue tied yet?), but I sure would have liked to have seen where Conway and Vosburg planned to take Mikaal Tomas.

Posted by The Groovy Agent at 6:34 AM