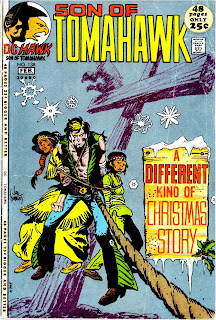 Fans of DC's Golden and Silver Ages can tell you that DC produced quite a few unique books during their heyday. One of those featured a Revolutionary War hero (kind of modeled after Daniel Boone) called Tomahawk. The character Tomahawk (Tom Hawk) made his debut in Star Spangled Comics #69 (cover dated June, 1947), where the strip ran until issue #130 (cover dated July, 1952). Tomahawk also appeared in World's Finest Comics from issue 33 (cover dated March, 1948) through #101 (cover dated May, 1959). Tomahawk's own comic ran 140 issues, from 1950-1972. Cool and creative concepts tended to have a long life back in the "good old days". Toward the end of Tomahawk's run, the mag was re-titled Son of Tomahawk. Our hero was allowed to grow old and retire, letting his son, Hawk (Hawk Hawk?), take over the adventuring (something that pretty much only happened in Imaginary Stories, over on the superhero side of DC). Written by Bob Kanigher, drawn by Frank Thorne, and edited by Joe Kubert (who provided the awesome covers), Son of Tomahawk, featured some really cool stories in the early 70s. Here's one of my favorites, from Son of Tomahawk #138 (October/November, 1971), "Christmas"!