Sunday Funnies: The Beverly Hillbillies in "Pass the Skis, Please" 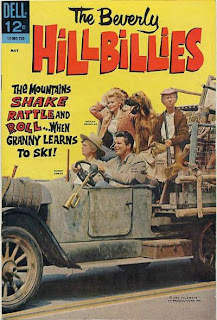 Well doggies! I'm sure y'all have heard tell of an old TV show called the Beverly Hillbillies (mebbe you've even watched it!). It was a powerful big hit, I hear tell. They still show it in what they call "re-runs". Bet ya'll didn't know that Dell Comics published 21 issues of a comicbook about Jed and his kin from 1963 to 1971 (purt near as long as the TV show was on the air!). Well, they shore did. They's purty good stories, too. Take this'un from the Beverly Hillbillies #17 (February, 1967) called "Pass the Skis, Please". It's by a fella name'a Henry Scarpelli. From the name, he don't sound much like a mountain man, but he does a hum-dinger of a job'a capturin' the feel'a th' show. Sit a spell. Take your shoes off. Y'all come back now, y'hear?

Posted by The Groovy Agent at 8:01 AM