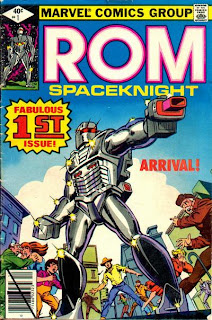 It's time, Groove-ophiles, for one of the most-requested Famous First Fridays in the history of Diversions! If you've been paying attention, you knew it had to be coming. Comics based on toys? C'mon, you can't be surprised that today's focus is on none other than the Guardian from Galador, ROM, Spaceknight!

The bad news is, Ol' Groove is short on time, so I won't have a chance to ramble on about ROM's origins as I'd like (for some of you, that may be the good news...). I really don't have time to tell ya that Bill Mantlo wrote all 75 issues of ROM. Or that Sal Buscema drew the first 58 issues. Or that Steve Ditko drew issues 58-75. I don't have time for any of that stuff. Sorry. The good news is that there is an exceptional website devoted to all things ROM called ROM, Spaceknight Revisited. Go there to learn about how the toy ROM was developed by a fella by the name of Bing McCoy (ain't that a great name?) for Parker Brothers. Go there to read about how Jim Shooter saw the promotional video for ROM, nabbed writer Bill Mantlo and told him he just had to develop a comicbook around it (After all, he'd done so well with the Micronauts!). Go there to see lots of far-out pics of the toys. Go there after you've read the fabulous first issue (September, 1979), written by Mantlo with outta site art by Sal Buscema (and dig that crazy Frank Miller/Joe Rubenstein cover)!

A final note: Ol' Groove had done a bit more digging and found an address where you can send donations to help Bill Mantlo with his health care funding: Mike Mantlo, 425 Riverside Drive, Apt. 12-E, New York, N.Y. 10025. That's Bill's brother, Mike who's handling the donations, as well as overseeing Bill's care. It's the holidays, so give a little, okay? Ol' Groove thanks ya!
Posted by The Groovy Agent at 6:31 AM