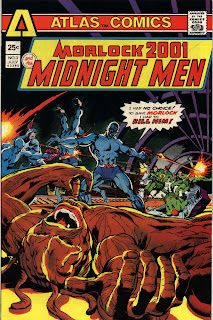 One of the most popular posts on the ol' Diversions so far was way back in October, when Ol' Groove gave ya the lowdown on Morlock 2001 (any last-minute party crashers can read that pulse-pounding post right here). Well, since we're celebrating endings, I thought I'd share the fateful finale to that screwy series. As you'll see, this was a last-ditch effort by Atlas/Seaboard to save their sci-fi/horror mash from oblivion. New editor, Larry Lieber and new writer, Gary Friedrich teamed with the new (and far-freakin' out) art team of Steve Ditko and Bernie Wrightson to kill off Morlock and turn the mag over to a group of whackos called the Midnight Men. We'll never know if Morlock was truly dead or if the revamp would'a worked as there were no more issues of Morlock 2001 published after this one. Still, ish 3 (April, 1975) was a hoot-n-a-half. Well worth checking out, Groove-ophiles!